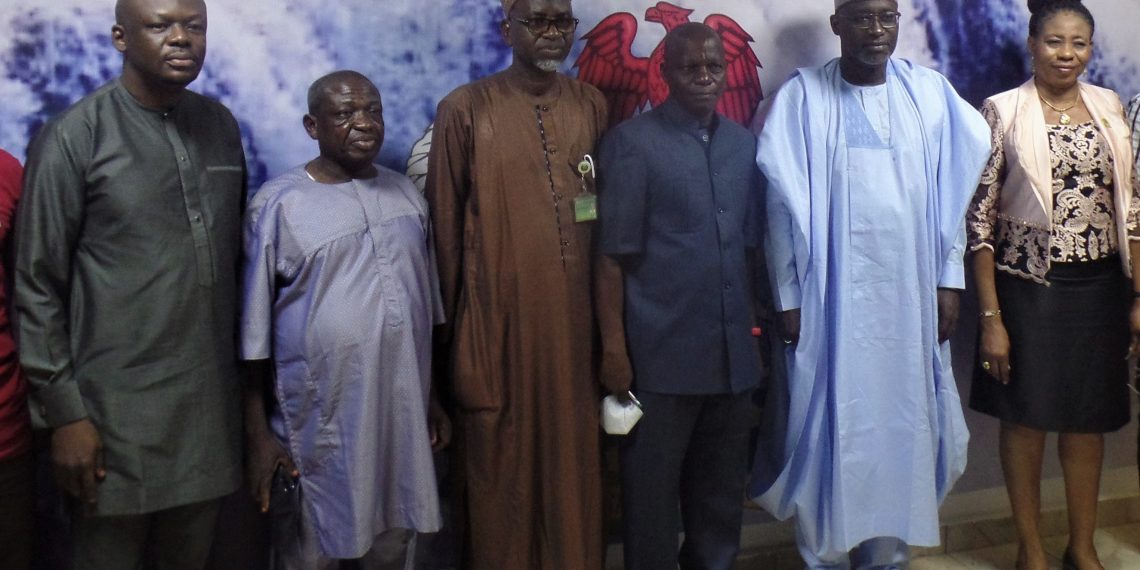 The groups' representatives and the minister after their meeting on Tuesday [Photo credit: Premium Times]

The Amalgamated Union of Public Corporations Civil Service Technical and Recreational Services Employees (AUPCTRE) and the Corporate Accountability and Public Participation Africa (CAPPA) have restated their demands for the National Assembly to jettison the National Water Resources Bill 2020 at a meeting with Minister of Water Resources, Suleiman Adamu, in Abuja on Tuesday.

The meeting, at the instance of the minister, followed country-wide criticism that has trailed the re-emergence of the Bill in the current Assembly after it failed to secure concurrent passage by both Houses in the Eighth Assembly in 2018.

Benjamin Anthony, AUPCTRE national president, described the meeting with the minister as “frank.”

“The minister advanced reasons why the bill should pass but we drew his attention to the contentious clauses that must be addressed,” Mr Anthony said.

“We restate our opposition to this anti-people bill and urge the National Assembly to trash it. The bill fails to address human rights issues and does not enjoy the support of Nigerians.”

Philip Jakpor, CAPPA director of programmes, said the contents of the bill are against the spirit of the July 28, 2010, United Nations General Assembly Resolution which recognised the human right to water and sanitation.

“Our position remains unchanged: President Buhari should use his good office to recall this contentious bill from the legislative quarters and kick-start a fresh process which will entail consultation and input from Nigerians from the beginning through the entire process at the National Assembly. ”

AUPCTRE and CAPPA had, in a press briefing last month, raised fears that the bill will fling the doors wide open for privatisers to seize the nation’s water resources. Both organisations in a joint letter to President Muhammadu Buhari on September 3 also catalogued obnoxious sections of the bill and how they posed danger to the attainment of the Human Right to Water.

In his reaction, Nobel laureate, Wole Soyinka, described the bill as a “roundly condemned project.”

The controversial bill is titled ‘An Act to Establish a Regulatory Framework for the Water Resources Sector in Nigeria, provide for the equitable and sustainable development management, use and conservation of Nigeria’s Surface Water and Ground Water Resources and for related matters.’

It failed to secure concurrent passage in both Houses in the Eighth Assembly. In the current dispensation, it has scaled second reading in the House of Representatives and has been referred to the House Committee on Rules and Business.

Some of the contentious provisions in the bill include:

Section 98 – which states that “the use of water shall be subject to licencing provisions.” Section 107 says that a licence may be cancelled if the licencee “fails to make beneficial use of the water.” Section 120 makes it compulsory for Nigerians to obtain a driller’s permit before sinking a borehole in their homes.

Sec. 104 – Emergency powers in case of shortage of water

(1) (b) direct a person who has a supply of water in. excess of his needs for domestic purposes to reduce the amount he is permitted to abstract under the terms of any licence or general authorization.

Sec. 125 – Entry onto land in furtherance of duties
(2) An authorized person’ may, at any reasonable time and on production of their identity card or other instrument or certificate of designation if so required, enter a property with the necessary persons, vehicles, equipment and material in order to carry out routine inspections of the use of water or disposal of waste water under any authorization.

(1) No person shall-
(a) use water otherwise than as permitted under this Act;