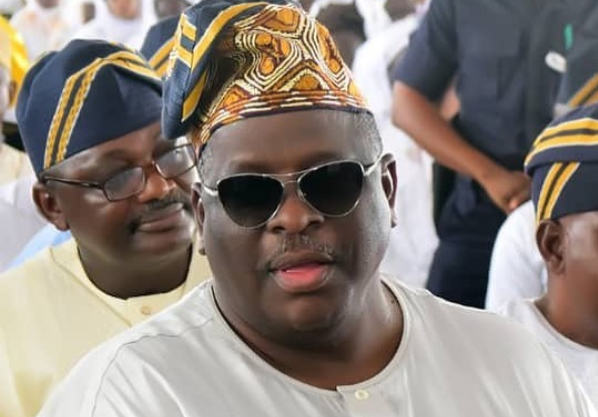 Political associates and rivals of the former senator, Buruji Kashamu, have mourned his death, describing it as a shock.

The Ogun-born politician and a Peoples Democratic Party’s chieftain died Saturday at the First Cardiology Consultants Hospital in Lagos.

His friend and former colleague at the Senate, Ben Murray-Bruce, confirmed that he was being hospitalised at the facility after contracting the killer-disease, COVID-19.

Mr Kashamu was the founder of Western Lotto Limited, one of Nigeria’s lottery operators.

He served as the senator representing Ogun East in the eighth National Assembly and for years was wanted in the United States for alleged drug offenses. He always denied wrongdoing.

According to his spokesperson, Austin Oniyokor, the remains of Mr Kashamu will be interred Sunday in his Ijebu-Igbo home, in accordance with Islamic rites.

A former vice president, Atiku Abubakar, in a tweet, said his thoughts and prayers were with the family and friends of the deceased.

“May the Almighty Allah accept his soul, forgive his shortcomings and heal the loved ones he left behind,” he wrote.

“I was devastated to receive the sad news of the passing away of my former colleague and friend, Senator Buruji Kashamu. He was a kind and compassionate man, always ready to make himself available in support of any of his colleagues. With this attitude, he won the hearts of many,” he posted on social media.

He commiserated with the Kashamu family, PDP members across the South West Zone, and the government of Ogun State over the loss.

Also, Reuben Abati, the running mate of the deceased in the 2019 governorship election, said he was “completely heartbroken” by the death of Mr Kashamu.

In a statement Saturday night, Mr Abati said he felt like an orphan having lost a political mentor in Mr Kashamu.

“I may have worked with the PDP government at the Federal level, but he was the man who brought me into direct, partisan politics. He was one of the most generous men that I have ever known. He was determined to groom me and he did. He taught me the ropes. He linked me with the grassroots. I learnt a lot from him. Senator Kashamu mentored me and others without any strings attached,” he wrote.

Speaking on Mr Kashamu’s political intentions before death, Mr Abati disclosed that the deceased no longer wanted to run for office in 2023, but made it clear he would support others.

“Death is a cruel fact of human reality. It puts an end to life and many things. But Senator Kashamu will never be forgotten by those who loved him and who were privileged to relate with him,” he stated.

Both Messrs Daniel and Abiodun have been one-time rivals of Mr Kashamu.

Messrs Daniel and Kashamu were at loggerheads with each other over the leadership of the Peoples Democratic Party (PDP) in Ogun State.

Also, Mr Kashamu contested against Mr Abiodun twice at the election. He won the senatorial contest in 2015 but lost at the governorship poll in 2019.

In a condolence message, Mr Daniel described the death of the PDP chieftain as a rude shock.

“I picked a timeless lesson of how transient life can be from this sad occurrence. I am glad despite all our years of political disagreements, conflicts and turbulence, by the hands of providence my heart found a rare opportunity of forgiving and making up with him before his untimely death,” he wrote.

Mr Abiodun in a statement signed by his Chief Press Secretary, Kunle Somorin, said he will continue to reserve a place of respect, recognition and service for the late politician.

“I personally wish for the late Senator, Allah’s Al Jannah Firdaus, while on behalf of my family, the Government and People of Ogun State, I express our deepest condolences to his family on this devastating national loss,” Mr Abiodun said.