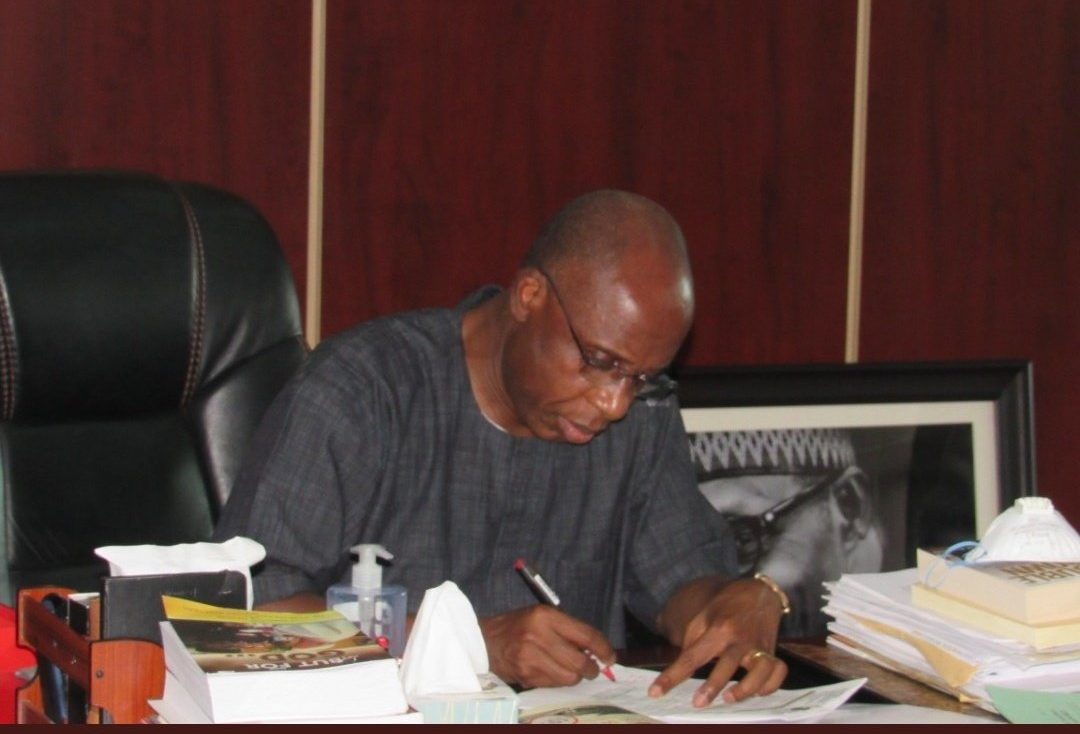 The Minister of Transportation, Rotimi Amaechi, has explained that the clause ‘waiving sovereignty’ in the loan agreement between Nigeria and China is only a contract term, a sovereign guarantee that assures payback according to the terms and conditions of any loan.

Mr Amaechi made the clarification at the weekend while answering questions about the loan controversy on a TV programme.

He also explained that the Ministry of Transportation is not responsible for taking loans, but to implement the project or contract for which the loans were taken.

He said, “It is a commercial agreement, it’s a trade agreement between Nigeria and China. The first issue is that Ministry of Transport does not take loan. Anything about loan, talk to Ministry of Finance. What I signed is what they call commercial contract, that is contract between the federal government and CCECC as a contractor.

“The contract between Nigeria and China is usually signed by the ministry of finance on behalf of Nigeria, but that will be escaping the issue. Whether it is the Ministry of finance that signed it or the Ministry of Transport, the issues are the issues. There is no contract without an agreement and that agreement must contain some terms and one of the terms that this one contains, is not that you’re signing away the sovereignty of the country. No country will sign away its sovereignty. What you do is, you give a sovereign guarantee; and I’m ashamed of those who interpret it the wrong way.

“Now, when you say ‘I give you a sovereign guarantee and I waive that immunity clause, the immunity clause is that, if tomorrow I’m not able to pay you and you come to collect the items that we’ve agreed upon, that these are items I have put down as guarantee, I can use my immunity and say no, you cannot touch our assets, we are a sovereign country. Is China our father that will give us money for free? They (the Chinese) are saying, if you are not able to pay, don’t stop us from taking back those items that will help us recover our funds. And it’s a standard clause, whether it’s with America you signed it or with Britain or any country, because they want to know they can recover their money. What the clause does is to say to you, I expect you to pay according to those terms and conditions. If you don’t pay, don’t throw your immunity on me (the lender) when I come to collect back the guarantee you put forward, that’s all.

“The waiving of immunity simply means in trade parlance that I’m not giving you this loan free. Just like if you go to take a loan from the bank, the moment you don’t pay, they go after the assets you put down. And people are politicising it. The Chinese can never come and take over Aso rock and become President or Minister.

In the event of a default, Amaechi stated that the lender can only go after, and take back the same assets built with the loaned funds. “And if the assets you put down become depreciated, then you negotiate which assets they can go after. The Chinese will never take over what was not constructed with the loan.”

Allaying the fear of some Nigerians asking if it’s possible to repay the loan and not get into the same situation as Zambia, Amaechi stated that the loan was already being repaid.

“But we’re paying, he said. “In the same National Assembly committee sitting, they were told that out of the 500 million dollars, we’ve paid 96 million dollars already. Nigeria is already paying… So, it’s not that Nigeria doesn’t have the capacity to pay back. We’ll pay back. At 2.8 percent, what other country would give you that loan? 2.8 per cent for 20 years with 7 years moratorium, why can’t you pay back? The repayment plan is not done by us, it’s done by the ministry of finance, but they are meeting the requirements. At any point in time that we need to pay, we pay.”

The minister further explained that the loans are not paid to him nor the Ministry, which automatically eliminates any fear of corruption or diversion of funds. They are paid directly to the contractor in China.

“I told them at that meeting, that these loans are not given to us, they are paid directly to the contractor. Once we sign that the job has been done, they pay the contractor. And this has never been done before. So what is critical is that the projects are being done. Or, are they trying to rubbish the fact that there is a railway from Abuja-Kaduna?

“These (Chinese) loans are not paid here, so you can’t even steal it. What we do is ensure that the work is done. We hired an Italian company that goes with our engineers in the ministry to ensure that the Chinese meet the European standard, so that there are no fake things or poorly done work. When they check and say yes, this has been done and done to the standard of the contract approved, then they pass it on to us, we sign and approve that the work has been done. It is then sent to the ministry of finance who also appends their signature and passes it on to the Chinese Exim bank who then pays to the contractor. “

“The job is development related. If you don’t do it, you don’t get paid. So the contractor would want to do the job, he wants to satisfy his client, so that the client can sign to say that he has done the job.”

Mr Amaechi also reiterated his call to the National Assembly to put a hold on the probe as some loans were still being expected for the completion of the Lagos to Ibadan and the construction of the rail from Ibadan to Kano and Port Harcourt to Maiduguri.

“There is an agreement for Abuja to Kaduna which was signed before we came, we signed the Lagos to Ibadan, we want to sign the Ibadan to Kano. Now we’ve also applied for them to give us a loan for Port Harcourt to Maiduguri which entails that when the loan is approved, we’ll construct the rail from Port Harcourt to Aba to Owerri to Umuahia to Enugu to Makurdi to Lafia to Jos to Bauchi to Gombe and then to Damaturu. Everybody is shouting that there is no railway in the South East. But there is railway in the South South.,” he said, noting that the Itakpe to Warri which was abandoned for 34 years was completed without taking a loan. He stressed that both the National Assembly and the country should at least appreciate that the government was making progress in terms of infrastructure development.

“So what should be primary to them is national interest, because we need to construct Lagos to Ibadan to be able to evacuate cargoes that come from Lagos to the hinterlands. So what they are doing now, may likely stop that. The same way, the government is under pressure to construct Port Harcourt to Maiduguri which passes through the south Eastern States and the North Eastern states.

“If we go now and the Chinese say ‘we won’t give you the money because the arm of government that is supposed to approve this loan, which they have already approved are beginning to question the loan they have approved, we are not sure that we can recover the loan,’ then we can’t finish our projects,” Amaechi said.

He further explained that all loan applications pass through the National Assembly for approval and wondered why they are investigating same. He added that he would have loved to publish those clauses if not for the issue of confidentiality in government, stating that the National Assembly know about the clauses because it is unconstitutional to take a loan that is not approved by the national assembly.

“The national assembly is aware of all these loans, so ask why are they investigating. The Chinese is just asking us to show them the evidence that we will pay back which is the immunity clause, if we don’t pay, they can take back their assets and don’t forget that we can’t take loan without the National Assembly approval.