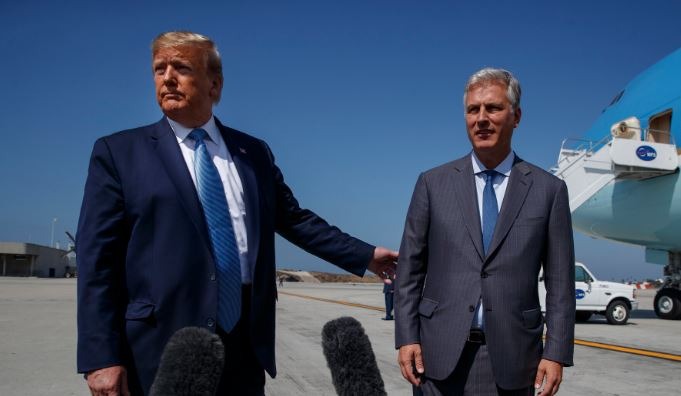 The statement said Mr O’Brien, 54, who has been self-isolating and working from home has mild symptoms.

There was no risk of exposure to Mr Trump or Vice President Mike Pence, the statement said.

“He has mild symptoms and has been self-isolating and working from a secure location off site.

“There is no risk of exposure to the president or the vice-president. The work of the National Security Council continues uninterrupted,” the statement read.

According to the BBC, Mr O’Brien is the highest-ranking official in Mr Trump’s administration known to have tested positive, after Mr Pence’s press secretary Katie Miller, a military member who works as a White House vale and a helicopter squadron Marine.

It is not clear when Mr O’Brien and the president last met, but they appeared together two weeks ago on a trip to Miami, the BBC reported.

read also: COVID-19: Trump to suspend all immigration to U.S.

According to Bloomberg, Mr O’Brien had been out of his office for a week and that the adviser had contracted the virus after a family event.

Anyone near the president is tested regularly for COVID-19 but the lack of social distancing still raises concerns about the potential spread of the virus to other top-ranking officials.

Mr O’Brien is believed to be the highest-ranking Mormon member of the Trump administration.

He replaced John Bolton as national security adviser last September after Mr Bolton left amid a fallout with Mr Trump.

COVID-19: Court hears suit against SGF, others over violation of protocols at Abba Kyari’s funeral