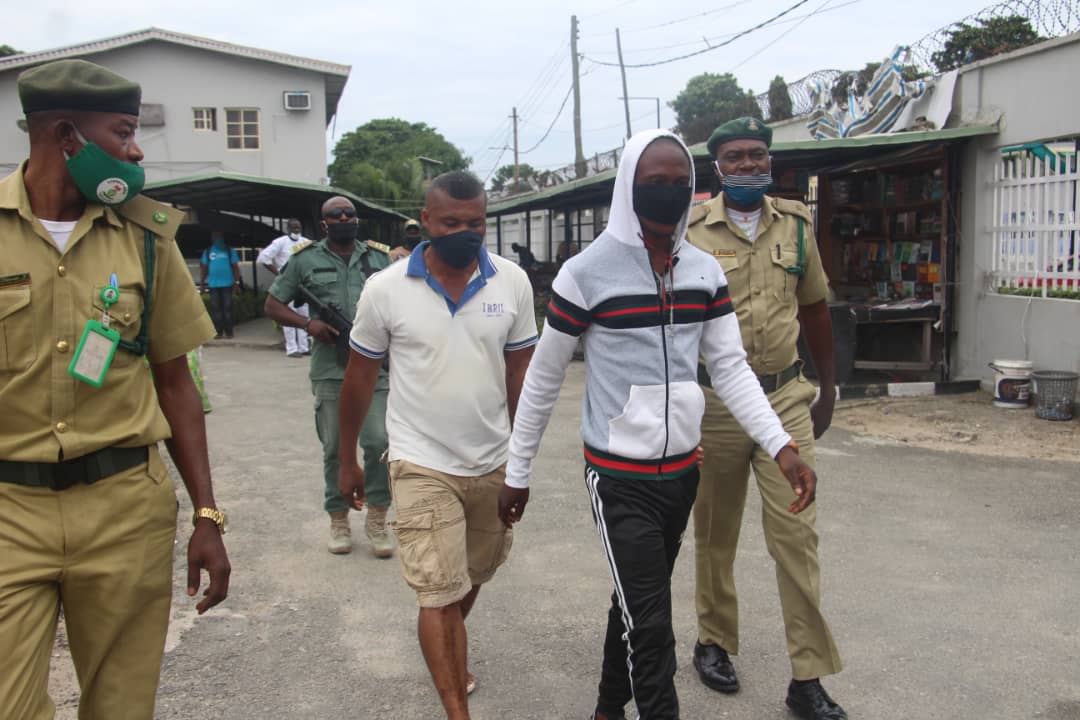 The convicts being led to a correctional facility

A Lagos Division of the Federal High Court on Friday sentenced two businessmen to two years in prison for producing and distributing substandard engine oil.

Uche Johnson and Kingsley Meteke were sentenced by Oluremi Oguntoyinbo, the judge, after they pleaded guilty to the offence.

The convicts admitted to adulterating 128 drums and 9.45 litres of engine oil.

They were charged with four counts of production, possession, dealing in and distribution of substandard engine oil.

The Standards Organisation of Nigeria (SON) said the defendants indulged in the production of engine oil which did not meet mandatory industrial standards.

The defendants claimed that the products were good for public consumption and for optimum engine performance, which prosecutors said were false.

The products were said to have failed to comply with the Standards Organisation of Nigeria’s (SON) Conformity Assessment Programme (SONCAP).

According to the prosecution, the offence contravened the provisions of sections 1(8) and 1(8)(II) of the Miscellaneous Offences Act, 2004.

The defendants had initially pleaded not guilty to the charges but later changed their plea to guilty.

The sentence will begin from January 27, 2019, when the defendants were arrested.

The prosecuting counsel, Joseph Olofindare, said the judgment would serve as a deterrent to manufacturers and importers of substandard products.

“I want to tell genuine manufacturers and consumers that they should not be despondent or complacent. SON is there to prosecute any offender.

“It’s a judgment that will send a message to the public that SON is working tirelessly under the leadership of Osita Aboloma.

“If you’re an importer or manufacturer, you either bring products that are certified under Mandatory Conformity Assessment Programme (MANCAP) and SONCAP, otherwise the fate that befell these individuals will also befall those who are indulging in product adulteration.

“For our consumers, the Director-General and management are working tirelessly to ensure that consumers get value for their money and that only standard and certified products are in the market.”