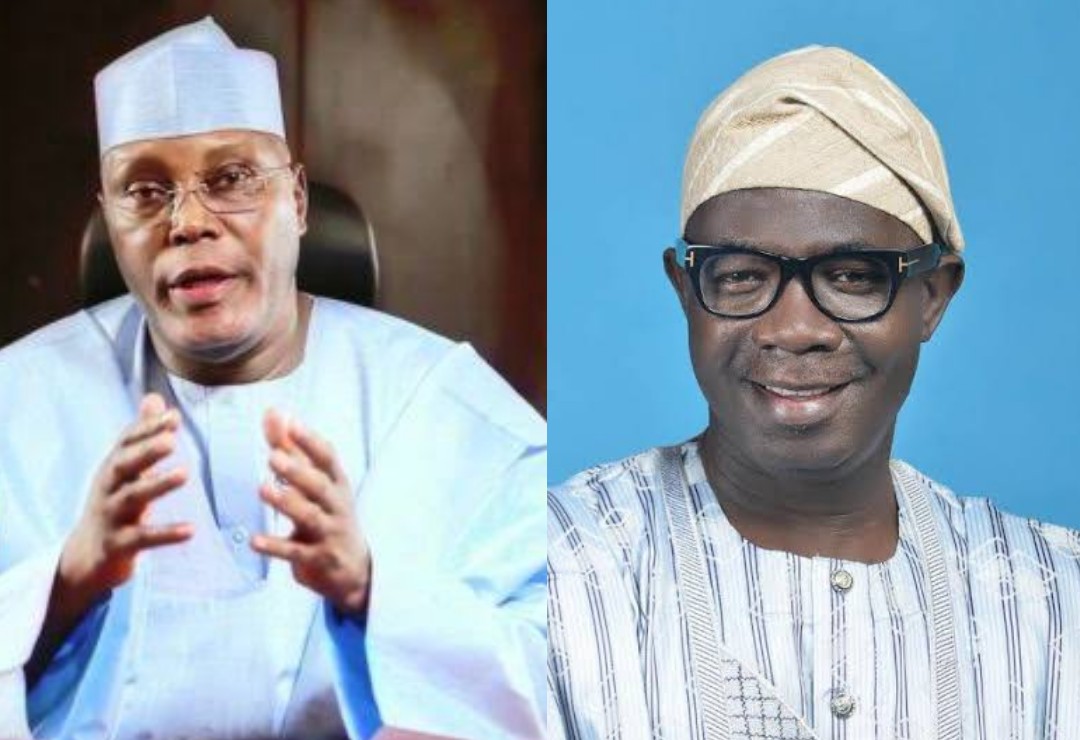 A former vice president, Atiku Abubakar, and other top members of the Peoples Democratic Party (PDP) have welcomed the Deputy Governor of Ondo State, Agboola Ajayi, to their fold.

Mr Ajayi resigned his membership of the All Progressives Congress (APC), on Sunday. He, however, told PREMIUM TIMES that he would not resign from the administration of Governor Rotimi Akeredolu.

In his message shared on Twitter, Mr Abubakar said PDP is able to accommodate democrats desirous of people-oriented change.

He also condemned the actions of security agents, who hindered Mr Ajayi from leaving the state government house with an official vehicle on Saturday.

“Meanwhile, security agents should not be encouraged to clampdown or intimidate citizens on account of their political party preferences.”

Meanwhile, security agents should not be encouraged to clampdown or intimidate citizens on account of their political party preferences. -AA

In the same vein, Kola Ologbondiyan, the PDP National Publicity Secretary said: “He is welcome to the PDP. Our party is democratic and open to all lovers of good governance and democracy. So, he is welcome”

One of the PDP aspirants for the Ondo governorship position, Olusola Ebiseni, in his reaction, said he was not disturbed by the coming of Mr Ajayi

“The PDP has an umbrella big for all. He is welcomed like other bigwigs of other parties willing to pitch their tents with the PDP winning team.”

On Saturday, Mr Ajayi was prevented from leaving the government house in Akure in an official vehicle by the state’s commissioner of police, Bolaji Salami.

Mr Salami said he recently caught wind of Mr Ajayi’s moves to defect from the APC to PDP, an action he said should render him unqualified for some official benefits.

In response, Mr Ajayi argued that he ought to enjoy the perks of office as an incumbent deputy governor. He said he used his personal funds to buy the Toyota Hilux truck from which he was being denied access.

The deputy governor had been at loggerheads with his party over the coming governorship election in the state before finally leaving the party on Sunday.

He, however, said he would not resign as deputy governor because he was elected on a joint ticket and would love to serve his people.

“There is freedom of association and this is not the first time the deputy will leave his boss.

“It happened during Obasanjo and Atiku’s time. The court rules that there is freedom of association. It is a joint ticket and that was why the deputy governor’s irregularities affected (the) APC candidate in Bayelsa. So, resigning from (the) government is not in the radar.”

Mr Akeredolu, in a statement signed by his spokesperson, Segun Ajiboye, earlier on Sunday, said reports linking him to the incident were false. He said he did not ask the commissioner of police to restrain his deputy from leaving the government house.

But the Senior Special Assistant to Governor on Special Duties and Strategy, Doyin Odebowale, said Mr Ajayi on Saturday tried moving out some furniture, DSTV Decoders, TV sets, among others when he was stopped by security operatives.

Meanwhile, following his resignation from the All Progressives Congress (APC) and defection to the Peoples Democratic Party (PDP), Mr Ajayi has reportedly evacuated his personal belongings from the state government house.

He has also stopped sleeping at his official residence since Saturday, when he travelled to his hometown in Apoi, Ese Odo Local Government Area.

Sources in the government house told PREMIUM TIMES that he has not returned since he left on Saturday night and this was confirmed by Mr Ajayi’s spokesperson, Tope Okeowo, who said his principal is running for his life.

Mr Okeowo while confirming the development to PREMIUM TIMES on Monday afternoon said: “It is true that the deputy governor has packed his personal belongings out of the government house.”

Mr Ajayi, PREMIUM TIMES learnt, will be formally welcomed to the PDP on Monday.