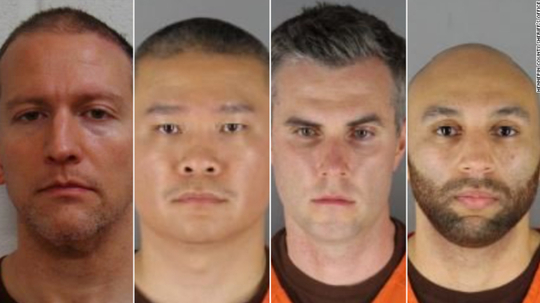 Former Minneapolis policeman, Derek Chauvin, who was filmed pressing his knee into George Floyd’s neck, was on Wednesday hit with an upgraded murder charge of second-degree murder.

His colleagues — Tou Thao, J. Alexander Kueng and Thomas Lane — , all whites, who were caught in the the racially charged killing were also charged with aiding and abetting murder, CNN said, citing court documents filed.

All four former officers have now been remanded in custody, each with a bail term of $1 million.

Chauvin, who has been in custody since last week, will appear before the jury June 8. All three others are billed to have their days in court on Thursday afternoon local time, court records cited by CNN say.

But attorney-general Keith Ellison warned the Minneapolis community bringing a case against a police officer is always challenging.

“Trying this case will not be an easy thing,” Ellison said at a news conference. “Winning a conviction will be hard.”

But he maintained that his partner in the prosecution, Hennepin County Attorney Mike Freeman, is the only Minnesota prosecutor who has ever successfully prosecuted a police officer for murder.

“We’re confident in what we’re doing, but history does show that there are clear challenges here,” Ellison said.

Since George Floyd, an unarmed black man seen in a video being pinned to death by three white former police officers nine days ago, died, protests have swept across major cities in America, despite curfews and the spread of COVID-19.

Thousands have been arrested and dozens of protesters and police injured. Some journalists have also been attacked. Cases of vandalism and looting have also been reported.

Although this week, demonstrations have largely being peaceful, with fewer arrests and violent confrontations compared to last week.

Nonetheless, there were clashes between protesters and police, in New York for instance, but authorities say the city was still quieter than before, with no reported instances of looting.

Not all Nigerian universities approved for post-graduate programmes, NUC warns, listing those approved