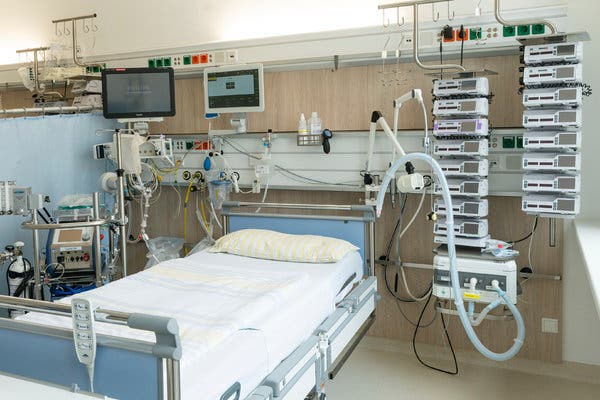 A ventilator - The New York Times

Nigerian auto manufacturer Innoson said on Monday that it was ready to convert its assembly lines to start producing critical medical equipment that may be in short supply as the country battles the coronavirus pandemic.

A shortage of ventilators and other critical equipment has become a growing concern amidst rising cases of COVID-19 across the world.

“Innoson Motors is ready to assist the government in any way we can, including the likability of converting out lines to produce ventilators and other equipment,” Cornel Osigwe, the company’s spokesperson, told PREMIUM TIMES on Monday, citing his discussion with Innocent Chukwuma, the group’s chairman, on the matter.

“But we need the government or other health institutions to place orders the quantity that may be required before we could take any step,” Mr Osigwe added.

With its disclosure to PREMIUM TIMES, Innoson has joined a growing list of automobile companies who expressed intention to repurpose their manufacturing plants to produce medical equipment across the world.

General Motors and Rolls Royce, major vehicle manufacturers in the United States and United Kingdom, respectively, have publicly disclosed that they could produce ventilators and other equipment.

But while many agreed that it was possible to retool a vehicle assembly line for production of ventilators, some medical equipment experts have warned that it might be several months before any results become useful.

“These are extremely sensitive machines with not only a lot of hardware, but also a lot of software. If one of the components does not work correctly, the whole machine shuts down and cannot be used any more,” Jens Hallek, a medical equipment production expert at Hamilton Medical, said Tuesday morning, Wired Magazine reported.

The Washington Post also reported that the U.S. Department of Defence had warned that it might take more than a year for carmakers or aerospace factories to start making ventilators.

Nigeria recorded its first casualty from coronavirus on Monday morning with the passing of a 67-year-old retired senior official of the state-run NNPC. The sexagenarian was amongst the 36 infections so far recorded in Nigeria since the first case was discovered on February 27, about three months after the virus broke out in China.

Nigeria is widely believed to be under-testing the number of COVID-19 carriers within its population. Less than 200 people are believed to have been tested, a grossly inadequate figure against the country’s nearly 200 million people.

Officials have admitted shortages of testing equipment, with many placing significant hope on the arrival of a consignment of testing kits and personal protective equipment from Chinese billionaire, Jack Ma.

But there are also concerns that some elderly and other immunosuppressed patients who may lose the ability to breathe on their own would not get a ventilator, a computerised unit that pumps air in and out of the lungs.

It was unclear how many ventilators are currently available at hospitals across the country, but in 2018 a medical expert decried as alarming the number of deaths being recorded in Nigeria due to acute shortage of oxygen machines.

Medical doctors at four different teaching hospitals told PREMIUM TIMES on Monday that they could not estimate more than 300 oxygen machines throughout the country.

“I cannot estimate more than 300 ventilators in Nigeria,” Segun Adeoye, a consultant neurosurgeon, told PREMIUM TIMES. “And you have to remember that all the ventilators are probably already occupied by patients suffering other forms of ailments before coronavirus outbreak.”

Mr Adeoye said Nigeria would be better off preventing large scale infection amongst the citizens because the requisite medical equipment to support hundreds of patients at once “are just not there.”

Enefaa Bob-Manual Officials at the federal ministry of health declined to comment on Nigeria’s ventilator capacity or whether the government had commenced efforts to acquire the equipment to support potential demand from the pandemic.