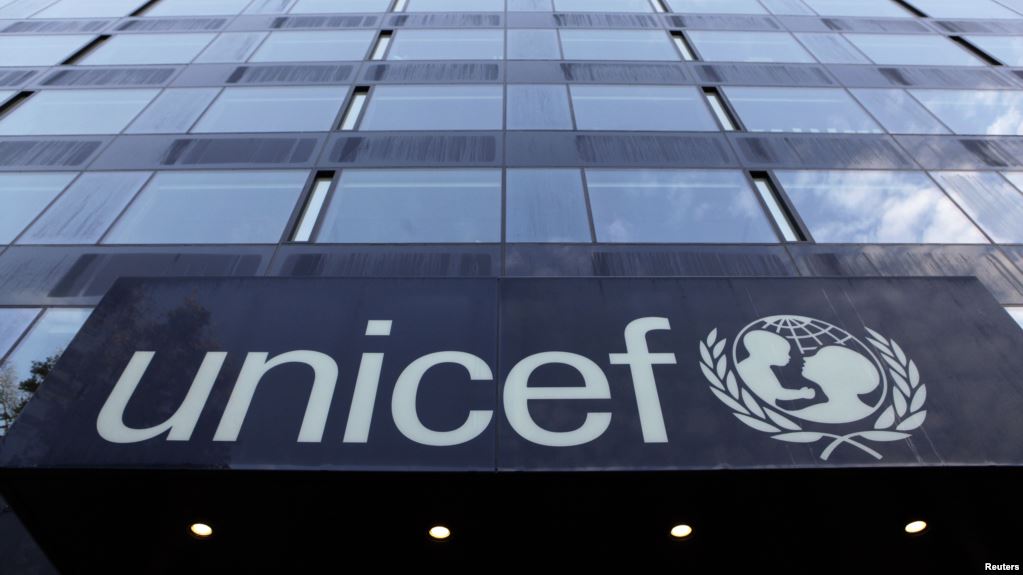 The UNICEF logo is pictured on a building in Geneva. [Courtesy: voanewscom]

As Nigeria joins the world to commemorate the 2019 International World Children’s Day, the United Nations Children’s Fund (UNICEF) has urged the Nigerian government, non-governmental organisations, policymakers, and individuals to give priority to the education of every child.

Addressing students of Government Day Secondary School Garki, on Wednesday in Abuja, the UNICEF Country Representative, Peter Hawkins, said priority should be given to the education of the child “as it forms the basis of defence for them in knowing and standing for their rights in the society.”

He quoted words from a special song for the day featuring, Chidinma, Niniola, Cobhams Asuquo, 2face Idibia and other artistes titled ‘For Every Child’.

He said “When a child is born they have a right. You are the light, you are the dream and you are the hope for tomorrow and for Nigeria.

“Every child especially a Nigerian child is born with a talent, is born with a future and it is for us to create a platform so that they can perform, inspire and be a part of the future of this country.”

Mr Hawkins commended the efforts and hard work of teachers worldwide and pledged his organisation’s support in promoting the rights of children in Nigeria.

Speaking on the CRC, he said it has become the most widely ratified human rights treaty in history “and has helped transform children’s lives around the world but still, not every child gets to enjoy a full childhood, too many childhoods are cut short.”

In Nigeria, although most states have adopted the federal Childs Right Act, PREMIUM TIMES reported how 11 northern states are yet to do so.

The states according to reports have blights of a high number of out of school children, malnutrition, forced marriages, among others.

Also, UNICEF said Nigeria accounts for more than one in five out of school children in the world.

However, the minister of education, Adamu Adamu, in October said the government has committed N10 billion to remove 10.2 million out-of-school children from streets in the next five years.

He said the government hopes to achieve the target by enrolling two million children yearly in the next five years.

Meanwhile, Nigerian musician, producer, and songwriter, Cobhams Asuquo, called for increased budgetary allocation for education and implementation of policies that protect the rights and privileges of children.

He said every Nigerian child has the chance and opportunity to re-write “all that was wrong with the country”.

Institute to clampdown on employers of underage househelp