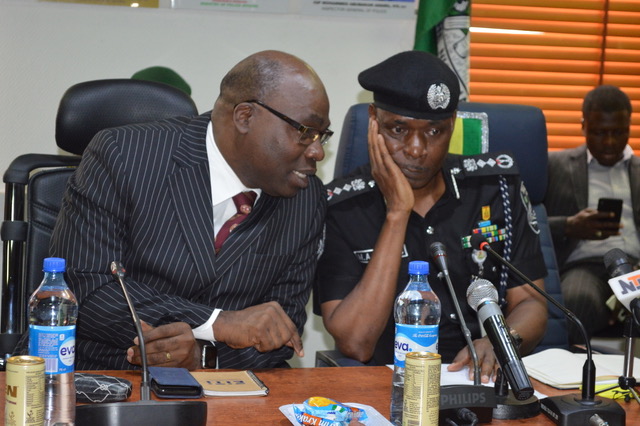 Chairman of the ICPC, Bolaji Owasanoye, and the Inspector General of Police, Mohammed Adamu, in a meeting. [PHOTO CREDIT: NAN]

The Independent Corrupt Practices and Other Related Offences (ICPC) has solicited the collaboration of the Nigerian Police to tackle corruption in the force.

The ICPC Chairman, Bolaji Owasanoye, made the call when he led a management team of the commission to the Inspector-General of Police (I-G) Muhammed Adamu in Abuja.

The spokesperson of the anti-graft agency, Rasheedat Okoduwa, said this in a statement on Tuesday in Abuja.

Mr Owasanoye cited the recent sting operation between the ICPC and the Federal Road Safety Corps (FRSC) that led to the arrest of some marshals involved in extortion of motorists.

The News Agency of Nigeria (NAN) recalls that 37 FRSC operatives were arrested in the operation in late August.

He said if replicated on “deviant policemen”, it would help “correct some of the public perceptions of corruption in the Police.’’

The ICPC boss stressed the importance of collaboration among law enforcement agencies to stem the tide of corruption in the country.

According to him, there are several areas of collaboration between the ICPC and the police that needed to be rejigged for effective service delivery.

One of them, he said, is the deployment of armed police personnel to the commission’s offices across the country.

He identified another area as the assignment of a ‘special protection squad’ for the commission’s “big-ticket investigations’’ like Constituency Projects Tracking, sting operations.

Mr Owasanoye explained that the current practice was for ICPC to write to Police Commissioners in various State Commands for armed policemen when the need arose.

The ICPC boss said the commission needed the support of the police and the State Security Service to secure government’s approval for some categories of its staff to carry arms.

He stated that due to the dangerous nature of ICPC operations, its operatives should be armed to protect themselves in the line of duty.

Responding, the police boss assured the commission of continued support to enhance its functions.

Mr Adamu said no “agency has all the resources needed to carry out its assignments’’, hence the need for the collaboration and support.

“The Nigeria Police is ready to collaborate with the ICPC because you need us and we need you in this fight against corruption,’’ he said.

He said the Force would assist with personnel, equipment and other resources at its disposal for the Commission to carry out its statutory assignments.

Mr Adamu noted that Police had been at the forefront of the fight against corruption with the creation of the X-Squad and a unit where Nigerians could report corruption online.