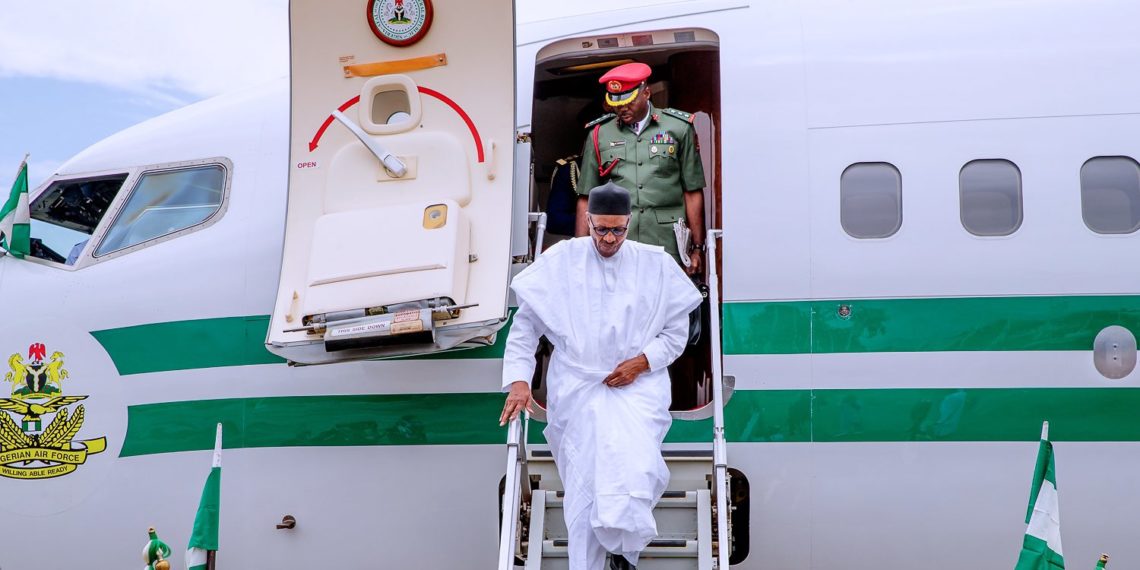 Buhari returns to Abuja after nine-day visit to Katsina

President Muhammadu Buhari on Saturday returned to Abuja after a nine-day official visit, including celebrating the Eid-el-Kabir with family members and inauguration of some developmental projects in Katsina State.

The News Agency of Nigeria (NAN) reports that shortly before departing the Umaru Musa Yar’Adua Airport, Katsina for Abuja, Mr Buhari had charged the military to be more spontaneous in restoring peace to the country, particularly states troubled by bandits.

He gave the order when he addressed 15 officers and 160 soldiers of the 17th Army Brigade and Nigerian Air Force 213 Operational Base in Katsina, under the “Operation Hadarin Daji’’, at the Airport in Katsina.

While in his hometown, Daura, Mr Buhari received Guinean President, Alpha Conde, and the two presidents performed Eid prayers in Daura on Sunday.

Mr Conde, who was welcomed by members of Daura community, was also conferred with a traditional as well as being treated to the traditional Durbar display at the palace of the Emir of Daura, Faruk Umar Faruk.

NAN reports that the developmental projects inaugurated by the president included network of rural roads where he applauded the progress being recorded under the administration of Gov. Aminu Masari.

The president, who also inaugurated the Nigerian Air Force Reference Hospital in Daura on Thursday, met with Internally Displaced Persons (IDPs) from seven local governments affected by banditry in the state.

Mr Buhari also received members of the Progressive Governors’ Forum and leadership of the National Assembly and Katsina State House of Assembly who paid him Sallah homage in Daura. (NAN)