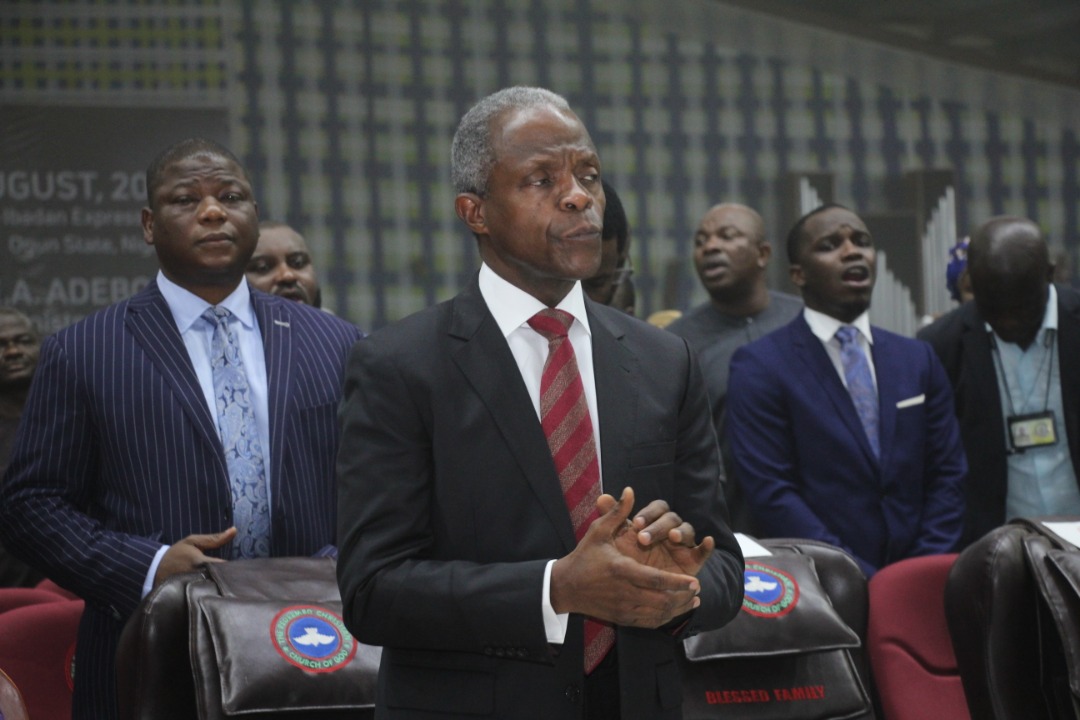 What God told me about Osinbajo’s helicopter crash — Adeboye

The general overseer of Redeemed Christian Church of God, Enoch Adeboye, has revealed what led him into praying for Vice President Yemi Osinbajo shortly before the helicopter crash in February he and his team survived in Kabba, Kogi State.

Preaching at the Holy Ghost Service of the Church’s 67th Annual Convention with the theme, “And God Said,” on Friday, Mr Adeboye said it happened during the February Holy Ghost Congress of the Church, which the Vice President was late to attend.

Using the incident to illustrate the passage that “no weapon fashioned against me shall prosper,” as part of God’s promises to His children, the cleric said he was in his prayer room when God whispered to him that his son was in danger.

In his own testimony earlier this year, Mr Osinbajo had said that he did not understand why the pastor would repeat the prayer for him.

In February, a helicopter that flew the Vice President and his team to Kabba in Kogi State crash-landed but all the passengers and crew on board escaped unhurt.

Mr Adeboye’s sermon, which was mainly decrees, commands and prayers on God’s promises, was one of the many highpoints of Friday night during the one-week Convention.

The two large auditoriums for adults at the Redemption Camp, and a children’s hall overflowed, with some people sitting on the floor outside.

With the 3 million sitting capacity of the Old Auditorium and 6 million for the new three-kilometre-by-three-kilometre auditorium, an estimated six million adults must have attended Friday’s evening plenary of the Convention. Everywhere one looked, there were seas of heads.

There was a huge turnout, too, during prayers for babies born in the last 12 months to barren mothers. Happy dancing mothers streamed to the altar area until pools of thousands of mothers were formed in both auditoriums.

“See how many homes where there was weeping over barrenness, have been thrown into joy because they came to Jesus and we cried to Him; now see their joy,” Mr Adeboye, who confirmed he loves babies said and led the congregation to pray for them.

There were similar numbers when Rev. Joe Olaiya who preached the first message, made the altar call.

Mr Olaiya noted as the only one who makes such calls even when Pastor Adeboye is at the Camp, stressed the importance of salvation from the world of sin.

“Sin puts you under the authority of the devil; any religion to help you must have dominion over sin, devil and death,” he said.

Seas of people were everywhere and this may have been why a young man, desiring to get as close to Pastor Adeboye as possible for whatever reason, breached security and protocol into the altar area for VIPs. He was promptly driven back. But recalling how the friends of a sick man broke the roof of a house to reach Jesus, the General Overseer asked the young man to be brought to him. He prayed for him and allowed him to go join the congregation.

In his main sermon based on how God spoke the world into existence in the Book of Genesis, Pastor Adeboye reminded the congregation about the power of God’s word and the need to hearken diligently to every bit of it.

He recalled that after creation, the world was without form but God said “let there be light” and there was light.

The inference from that, according to Pastor Adeboye, is that God’s word provides orderliness and erases confusion and darkness; accelerates progress and brings about fullness and fruitfulness.

“Let there be light also means let your joy begin,” he added.

Quoting from similar words of God, he said when God first spoke to man after creation in Genesis 1:27-28, He blessed him: “So, God created man in his own image, in the image of God created He him; male and female created He them.

“And God blessed them, and God said unto them, be fruitful, and multiply, and replenish the earth, and subdue it: and have dominion over the fish of the sea, and over the fowl of the air, and over every living thing that moveth upon the earth.”

Elaborating the implication of the blessing, he said with that all forces in Heaven and on earth see to it that the blesse succeeds; angelic forces also step in and one cannot be cursed.

Also being fruitful and multiplying means one will increase rapidly, while replenishing means an overflow.

‘God is more than enough, so blessing you means He will provide all your needs.” He said. “God will also promote you, and because He has the final say, when He opens a door, no one can shut it and similarly doors he shuts cannot be opened.”

At every point, Pastor Adeboye led congregational prayers and issued a decree. Towards the end, he opened the alter area for people to pray there for what they wished God to do for them this year.

Earlier, his wife, Folu Adeboye, led congregational prayer for all nations and their leaders, after an American Bishop, I. D. Pearse, had preached a sermon on the power of God’s word, stressing repeatedly that, “there is enough power in the word of God to make the word come to pass”.

The praise and worship session was electrifying with a large number of people dancing ecstatically in all directions.

There were also testimonies of people who had been blessed by God, including an asthma patient who was healed after 16 years; a woman whose son was healed from leukaemia after Pastor Adeboye’s prayers; and a woman who bore a set of twins even after doctors had said her fallopian tubes were blocked and her husband had low sperm count.