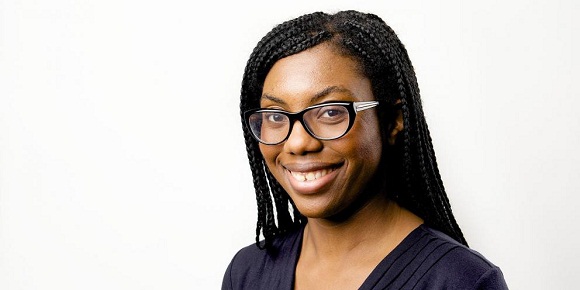 The move is part of his government reshuffle.

Mrs Badenoch is a British Conservative politician and Member of Parliament (MP) for Saffron Walden.

She is aged 39 and was born in Wimbledon, London, to parents of Nigerian origin. Her childhood was spent in Lagos, Nigeria, and the United States. She moved to the United Kingdom at the age of 16.

Mrs Badenoch once told MPs in the Parliament about her own experiences of poverty and how she used to do her homework by candlelight.

A software and IT engineer, she studied systems engineering at Sussex University and also has a law degree. She has worked in the banking sector for Coutts and RBS and is a mother of two.

Tweeting about her appointment, Mrs Badenoch @KemiBadenoch posted on 29 July:

“I’m humbled to have been appointed a junior minister at the DfE. A huge privilege to be able to serve and make a positive difference on a number of issues close to my heart. I look forward to working with the ministerial team and everyone at @educationgovuk …(1/3)”

“Thank you for all good wishes and kind messages of support received. I also look forward to working not just with @Conservatives colleagues but cross-party and grateful for the warm welcome from @TracyBrabin and @SteveReedMP who no doubt will be keeping me on my toes! (2/3)”

A former vice president of Nigeria, Atiku Abubakar, has also commended and congratulated Mr Johnson and Mrs Badenoch on the development.

“I commend and celebrate British Prime Minister, Mr. Boris Johnson, for appointing a British citizen of Nigerian heritage as a minister in his government,” he wrote, in a press statement made available to PREMIUM TIMES.

“Your cabinet has a lot to teach the world. With an average age of 47, it is the UK’s youngest-ever cabinet, and with over 25% minority representation, it is one of the world’s most diverse governments. It is also a gender-balanced administration, with 24% female representation. Putting together such a well-represented government is a testament to your ability to connect, include, and unite.

“Like I said in both my private and public messages to you, I am confident that under your leadership, Anglo-Nigerian relationships will be greatly strengthened.

“Let me also congratulate Mrs. Olukemi Olufunto Badenoch on her appointment as Parliamentary Under Secretary of State for Children and Families. I have repeatedly said that Nigerians, especially her youth, are natural leaders, with advanced intellect and abilities. I said this when I congratulated Kelechi (Kaycee) Madu on being made a minister in Canada and Mrs. Badenoch only corroborates my assertions.

“I urge Nigerians all over the world to note that global leaders acknowledge that we are hardworking people, with a community spirit that we take wherever we go. Nigerian youths are not lazy as is shown from these appointments, and I look forward to the day that we can show by our youth representation in Nigeria’s government, that they are as appreciated at home as they are abroad.”