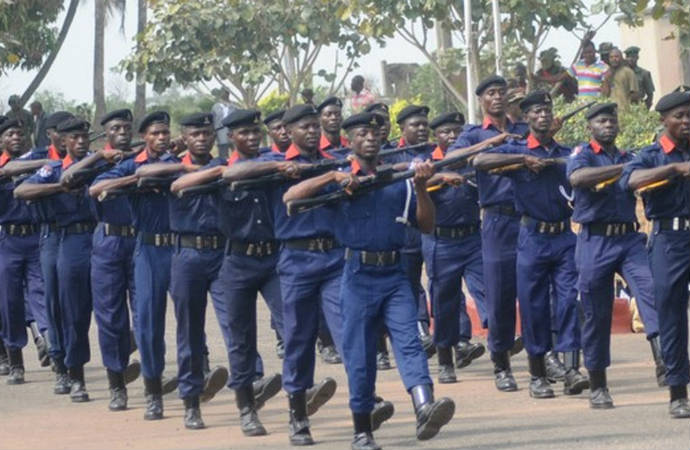 The Nigeria Security and Civil Defence Corps (NSCDC) on Wednesday announced the dismissal of one of its officers, Innocent Oshemi, who allegedly shot dead a colleague and a Korean national.

Abdullahi Gana, Commandant General of the Corps, said Mr Oshemi had been handed over to the police for prosecution.

Mr Gana said at a press briefing in Abuja, that the suspect allegedly killed Mamman Wuya, a Senior Inspector of the Corps at the Lagos Deep Offshore Logistics (LADOL) and the Korean, Tea Kun Kara, who was an employee of Samsung Heavy Industries in Lagos.

“We visited the police when they informed us of a Closed Circuit Television (CCTV) coverage of the incident.

“A staff committee was set up by the corps to look into the case after the CCTV inspection,” Mr Gana said.

According to him, the incident occurred on April 8, 2019 and the suspect had to be “disarmed by his colleagues in the office and was later handed over to the police.”

Mr Gana debunked the claim by Mr Oshemi that the corps owed him some money.

“We don’t pay our personnel directly, because we are registered under Integrated Payroll and Personnel Information System (IPPIS) and they are in charge of salary payments.

“Our men working at LADOL are being paid stipends into their accounts,” he said.

Mr Gana described the incident as unfortunate and said measures are being taken by the corps to avoid a repeat.

AFCON 2019: Why we lost to Nigeria – South African coach