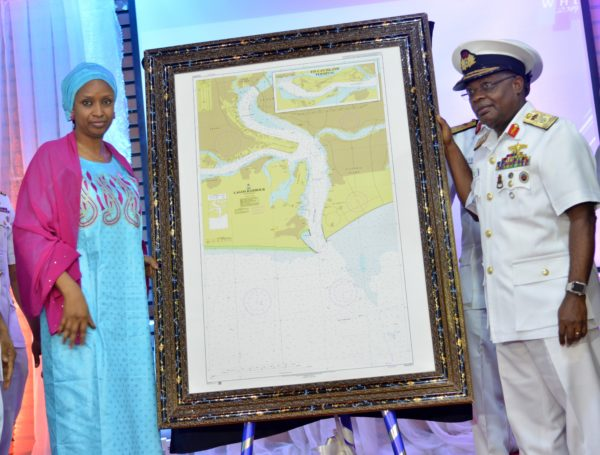 The Managing Director, Nigerian Ports Authority (NPA), Hadiza Bala-Usman, has lauded the Nigerian Navy for taking the lead in producing the first navigational chart of the Nigerian waters.

Ms Bala-Usman, in a statement by the Corporate and Strategic Communications of NPA, Adams Jatto, disclosed this during the 2019 World Hydrographic Day held at Naval Dockyard on Friday in Lagos.

She said efficient management of maritime environment needed plausible knowledge and professionalism in order to evolve critical strategies that would secure and regulate activities in the sector.

“Hydrographic Information to drive marine knowledge could not have been more appropriate for the event, without the basic information as provided by hydrography details.

”It will be difficult, near impossibility to acquire necessary knowledge for exploration and exploitation of the maritime environment as well as providing effective management tools for conservation and sustainable use of its resources,” she said.

She called for collaborative efforts with the industry through information sharing on data and joint survey projects so as to leverage the local chart production capacity already developed by the Nigerian Navy’s Hydrographic Office (NNHO).

Ms Bala-Usman said that through these efforts, more Maritime information would be made available to government and maritime operators in an internationally accepted manner.

She explained that these would stimulate effective governance of the nation’s territorial waters and sustainable use of the maritime resources to the benefit of the nation at large.

According to her, hydrography as an endeavour specifically assists the NPA management in deepening channels.

She added that hydrographic data had assisted the authority in expansion of marine services to Ijegun Egba channel which were critical for successful navigation and anchoring of the famous EGINA FPSO.

“It equally helped in completion of remedial dredging of escravos channel, frequent wreck removals along the channels and the success story of NPA’s recently unveiled Simulation Center at Dockyard amongst others.”

She said the UN recognised every June 21st as World Hydrography Day, pointing out that it was as a result of the important place of reckon it occupied.

She said that the recognition included being a source for revenue generation, moderating the climate and being a medium trade facilitation in the geographical space.

She noted that safety, security, and biodiversity of the environment played important roles in maritime environment, pointing out that “this is why the UN sustainable development Goal 14, lays emphasis on conservation and sustainable use of the ocean, seas and marine resources.”

The NPA boss said safety therefore placed a demand on nations to evolve measures for efficient management of their marine environment.

The Chief of Naval Staff, Vice Admiral Ibok Ibas, said the Nigerian navy was the first to produce navigational chart for national waters and expressed hope that the launch of the chart would take the nations maritime sector to greater heights.

Mr Ibok stated that the hydrographic chart was not only for safety and security within Nigeria’s territorial waters but also critical for information on sea and ocean management for national development.

He said the unveiled chart would be important to stakeholders in the blue economy and for the sustainable growth and harnessing of the vast ocean resources. (NAN)