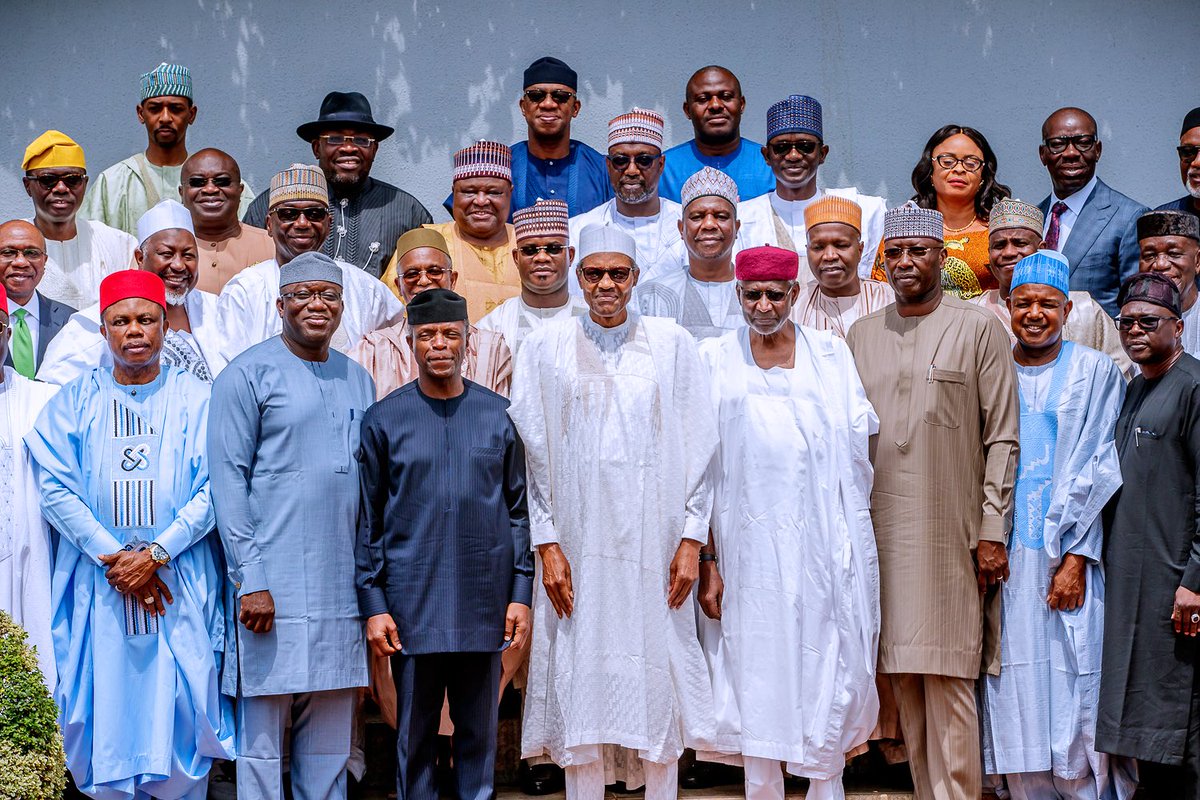 Prsident Buhari in agroup meeting with members of NEC

What I told Osinbajo, governors about insecurity across Nigeria – NSA

Mr Monguno, who addressed journalists after the NEC meeting, said he also told the NEC members that the violence between herders and farming communities was present in 16 states.

The NEC is headed by Vice President Yemi Osinbajo and has all state governors as members. The NEC for 2019 to 2023 was inaugurated by President Muhammadu Buhari on Thursday.

Mr Monguno said he briefed the council on the Boko Haram insurgency in the North-east.

“I briefed council on the situation in the North-east particularly the activities of Boko Haram which continues to remain very fragile.

“It is still a problem that needs to be readdressed with collective effort of both intelligence and operations,” he said.

The major general lamented that the activities of the Islamic State West Africa Province, a breakaway faction of Boko Haram, has spread in the North-east.

“…the multinational task force has been conducting offensive operations against these elements in the Lake Chad Area especially the Islamic State West Africa Province, whose activities have now stretched all the way down into the Lake Chad Area,” he said.

Mr Monguno said he also briefed the NEC on the activities of armed bandits in North-west Nigeria.

PREMIUM TIMES has reported how thousands of people have been killed and displaced in the past months after bandits attacked various communities in the North-west. Some of the states affected by the attacks include Katsina, Sokoto, and Zamfara.

“Now, the bandits in the North-west have become major threats to national security. Of course, in recent weeks the Nigerian Police Force has made a lot of gains in dealing with these criminals,” he said.

Mr Monguno said he also briefed the council on violence between herders and farming communities.

“Their activities are limited to 16 states so far, but council is working on the blueprint. It is on the verge of releasing these blueprint to solve these problems. It is a complex problem but it is about to be resolved within the council.

“I briefed council also on the danger of pipeline vandalism, illegal oil refineries and piracy. In recent months, we were able to destroy 373 illegal refineries and curtailed the activities of pirates. This situation in the Niger Delta is also affecting security in the Gulf of Guinea and we have been collaborating with the secretariat in Rwanda to work to reduce the activities of these people.

“So basically we need not just domestic but international effort to deal with this situation. The federal government has invested much in setting up maritime domain monitoring facilities and hopefully, in the next couple of months we should be able to set up all these structures to reduce the activities of these people.”

Mr Monguno then told journalists what he suggested were the causes and solutions to the insecurity across the country.

“I also briefed council on the drivers of insecurity which are unemployment, under-employment, poverty, drugs abuse, rising population.

“I also made suggestions regarding the way forward which include, employment creation and reduction of poverty, and … looking at stabilizing certain areas of the country by giving rise to affordable education. This is very important because in most parts of the country we have a lot of children roaming around without any formal education.

“And as the president has mentioned earlier which he was inaugurating the national economic council, we need to make education compulsory and free for every child in the country because the problem we face today are rooted in the fact that a lot of people who have been denied the opportunity, basically the opportunity to get formal education, end up over the years; there is accumulation of large mass of human beings who end up becoming criminals, drug addicts and so on and so forth.

“And they end up becoming tools to be used by elements in the wider society who have very dangerous intentions,” he said.

The retired general called for the ban of “certain groups ultimately running around under the guise of maybe getting some kind of education that is not really formal and then begin to cause a lot of problems for society.”

“Finally, I also emphasised to council the need to conduct police reforms. The police is the lead agency in dealing with any internal security problems. Any domestic issues should actually be vested with the Nigeria Police Force.

“Fortunately the IG is doing a fantastic job especially looking at the issue of community policing.

“Today, it is too complex to allow one organ of government to deal with these issues. Today, we need a whole of government, a whole of society approach right down to the lowest level in which individuals at local level are able to interface with the police and give them intelligence. Because dealing with asymmetric situation requires first and foremost human intelligence used to support technical intelligence so that these issues can be combated,” he said.