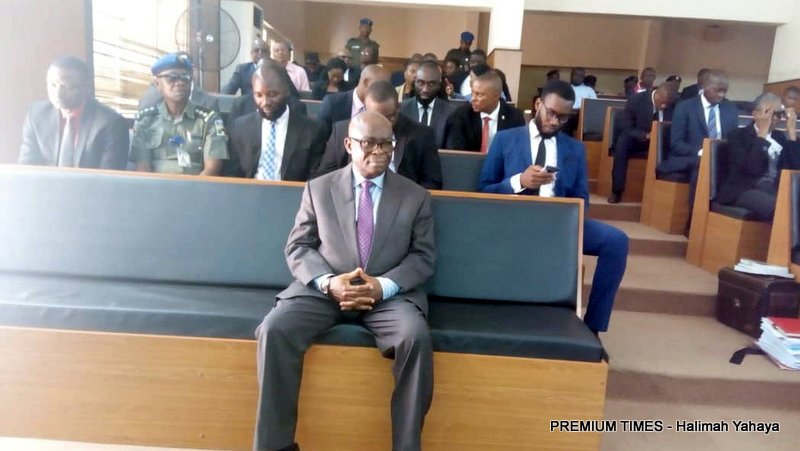 How lawyers reacted to Onnoghen’s conviction

Some Nigerian lawyers have reacted to the conviction of the embattled Chief Justice of Nigeria (CJN), Walter Onnoghen, by the Code of Conduct Tribunal.

The CCT, led by Danladi Umar, convicted Mr Onnoghen for his failure to declare some of his assets. The tribunal also ordered his immediate removal as the CJN.

The tribunal also ordered the forfeiture of cash found in five accounts linked to Mr Onnoghen.

The tribunal, invoking the full provision of Section 23 of the code of conduct law also ordered that Mr Onnoghen should not be allowed to occupy any public office for the next ten years.

Mr Onnoghen has appealed the decision.

In an interview with PREMIUM TIMES, a lawyer, Inibehe Effiong, said the presidency has succeeded in becoming the ‘accuser, prosecutor and judge’.

“It was the CCT Chairman who said that he is not subject to the disciplinary control of the NJC and the Federal Judicial Service Commission. He said that he is only answerable to the presidency.

“The President is the presidency. Therefore, it will amount playing with words to now say that the CCT Chairman is not under the control of the presidency. While that may be the case constitutionally, it becomes a different matter entirely when the issue of likelihood of bias is raised.

”If the CCT Chairman asserted that the presidency controls the tribunal, it begs the question whether the executive is not the accuser, prosecutor and judge.

“I align myself with the proposition that Section 158 (1) of the Constitution guarantees the independence of the CCT and other bodies listed therein.

“However, it is my considered view that the framers of the Constitution did not intend that those institutions should operate in total isolation of the other. Where the conduct of a judicial officer amounts to a breach of the judicial oath or the judicial code of conduct and a contravention of the Code of Conduct under the Fifth Schedule to the Conclusion, both the NJC and the CCT will have the authority to investigate the same and appropriate sanctions.

”In the light of the conflicting decisions by the CCT on the issue and having regard to the judgment of the Court of Appeal in Ngangiwa v FRN (2017), I will rather prefer that the Supreme Court clarifies the correct position of the law,” Mr Effiong said.

“On Friday the 29th of March, 2019, while overruling the no-case-submission of the CJN, the Code of Conduct Tribunal (CCT) Chairman made this prejudicial statement: The defence team ought to perform its duty as a minister in the Temple of Justice but it seems they are hell-bent on preventing the defendant from facing his punishment.

“With the above declaration, it became pretty obvious that the former Chief Justice of Nigeria was not given a fair trial. Indeed it was no fair-hearing when the tribunal chairman accused the defence team of preventing the defendant from facing his ‘punishment’ at a time the CJN was yet to open whatever defence he may have to the charge upon which he was being tried.

“What one could surmise from the above is that the tribunal chairman was working towards a pre-determined end. The outcome of that kind of abhorrent approach represents a travesty of justice and all that the administration of justice ought not to be.

“That such judicial oddities could befall the highest judicial officer of the land speaks eloquently of how low we have descended and how endangered the justice system administration, our democracy, had become.”

“Ordinarily, it is the expectation of all those who believe in the core tenets of the Rule of Law and constitutionalism that his appeal would be allowed and the judgment of the trial tribunal set aside without much ado.

“But when one recalls that the same Court of Appeal is yet to deliver judgment in the earlier appeals filed and argued by Justice Onnoghen almost two months now, there is room for one to worry for the fate of the appeal which Justice Onnoghen has now filed against his conviction.

”It appears that we are now in a political situation in this country where many things are now uncertain including otherwise certain and settled legal principles which ordinarily ought not to be.”

“The judgment has no implications on the judiciary because the case is between the Federal Republic of Nigeria and a former Chief Justice of Nigeria as an individual and not the judiciary as an institution as widely misconceived by some public and social analysts.

“The position of the law is that if anyone is alleged to have committed an offence, except the President or vice or a Governor or Deputy Governor, who are immune to criminal prosecution while in office, such a person, no matter the position he or she occupies in the three arms of Government must face the appropriate court or the tribunal that possesses the Jurisdiction to try such an offence and also punished such offender.

“By virtue of section 18 of the Fifth Schedule of the Constitution of the Federal Republic of Nigeria 1999 (as amended) and Section 23 of the Code of Conduct Tribunal Act 2004, the CCT possess the jurisdiction to try offence of false asset declaration or non-declaration of an asset by Public Officers. Therefore, the convict(ion) is not against the judiciary but against Hon. Justice Walter Onnoghen as an individual. The judiciary is an institution distinct from Hon. Justice Walter Onnoghen.”