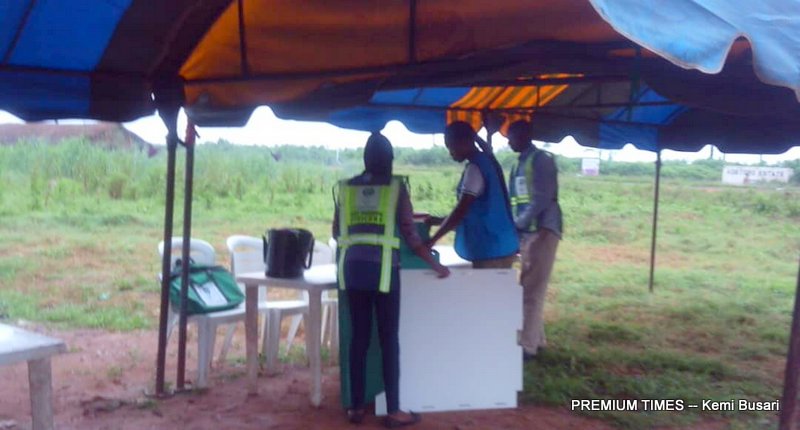 According to them, there is no uniformity in the allowances being paid corps members for election duties across Nigeria.

The corps members were recruited by the Independent National Electiral Commission (INEC) as ad-hoc staff for the elections.

They said INEC did not mobilise them for transportation to the various wards they were deployed, forcing them to pay the fares from their meagre monthly stipend.

They said the postponement of the elections Saturday morning by one week to this Saturday further compounded their woes.

Disappointed and frustrated, the corps members took to social media to vent their grievances over their experience on Saturday.

This newspaper gathered that prior to the deployment of the ad-hoc staff to the various wards, INEC failed to pay them the N4,500 fixed as their training allowance.

The commission said it would only make payment at the Registration Area Collation Centres (RACC) on Saturday. The payment could not be made, however, due to the postponement of the elections.

The failure to pay their allowance, coupled with the sudden re-scheduling of the elections, prompted the corps members to create a WhatsApp group chat a few minutes after the INEC boss, Mahmood Yakubu, announced the postponement of the elections.

In the chat group, the aggrieved corps members agreed to stage a protest at the NYSC head office in Abuja to demand for a conducive environment for their participation in the elections.

They also agreed to demand payment of their training allowance on or before Wednesday. They warned that they would boycott the elections if their demands are not met.

On Monday morning, information went viral across the different platforms, especially on Community Development Service (CDS) fora, that payment of the training allowance had commenced. The message read:

“The NYSC FCT management hereby share with you the pains and all the inadequacies you passed through in your INEC undertakings.

The delayed payment of your entitlements- feeding and training allowances by INEC and all other hardships experienced is never in our interest. In view of the above, the NYSC FCT management has been working tooth and nail with INEC to ensure prompt settlement of all your entitlements and conducive working condition/environment is put in place in all other future tasks.

Payment had commenced since yesterday, Saturday 16th Feb,2019 and it’s continuing up to Monday 18th Feb 2019. All corps members are therefore advised to link up with their respective Electoral Officers (EOs) for the feeding allowance while the training allowance is through the banks. Any complaints should be addressed to NYSC CDS Officers or the FCT Coordinator (08131913334).

We, therefore, implore you to be calm and law abiding. Remember that the NYSC bye Law is against unlawful assemblage or participation in demonstration or granting any form of address to the press or any other medium of communication whatsoever. You should always seek for redress through the proper channel, no matter the level of provocation. Be guided Please !!! Signed: NYSC FCT management”.

In Ondo State, two weeks before the elections, INEC organised a three-day training for the corps members recruited as ad-hoc staff on electoral process.

At the training, the corps members said they were promised N8,500 but were later paid only N4,500. The development led to an uproar.

The corps members also expressed disappointment over the decision of INEC to pay only those shortlisted without considering others who had spent time and resources to participate in the training.

The same situation was witnessed in Nasarawa and Kano states.

The corps members in Kano questioned the payment of N4,500 as feeding and transport allowance, as opposed to the N8,500 they were promised, which would have included training fee.

While it was rumoured that some youth corps members were paid N3,000 in Anambra State, a corps member serving in the state, who would not want his name disclosed for fear of victimisation, said some of them were yet to be paid. The corps member lamented they were only given N3,000 as against N4,500 paid their colleagues in other states.

They questioned the basis of the discrepancies across states.

However, in states like Cross River, Jigawa, Ogun, Enugu, Katsina and Osun, no payment has been made so far.

Corps members in Ogun state were promised to be paid at the LGAs but even after the event of last week Saturday, nothing has been done.

One of them serving in Ogun State also blamed INEC for shortlisting ex-corps members in the exercise, instead of the serving ones.

In a phone interview, a corp member serving in Abeokuta who also preferred not to be named, said N4,500 was stated as the training fee, while N13,000 was to be paid them as allowance for the presidential and gubernatorial elections respectively, summing up to N30,500.

The Law graduate from Adekunle Ajasin University, Akunga Akoko decried the unfair treatment of corps members on the eve of Election Day at Remo North, where he was posted to.

As at the time of compiling this report, he said only corp members posted to Ijebu East had received allowance after they staged a protest.

“As for me, they should just give me my N4,500. I am not interested in the election again. I am not going back for that election because I am not convinced that the situation will change by next week after all that I went through”, he complained.

He advised INEC to be more coordinated in deploying corps members to the field next time, as a way of compensating them for the pains and stress already incurred as a result of the postponed elections.

NYSC spokesperson, Adenike Adeyemi, did not respond to several calls and text messages sent to her known telephone line.