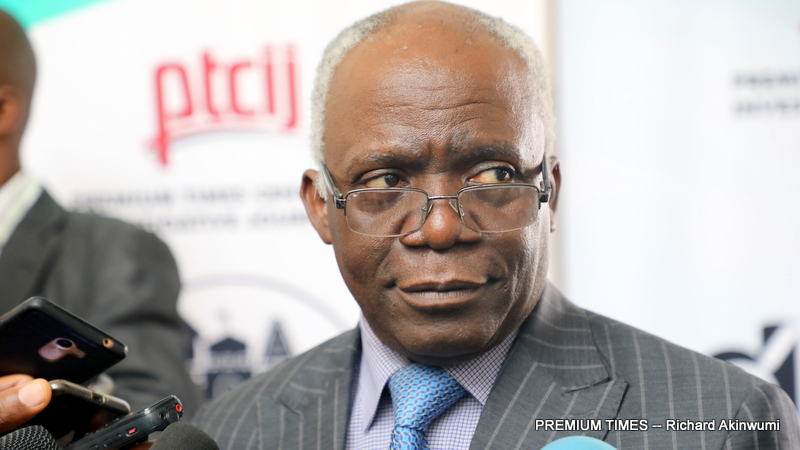 Femi Falana (SAN) writes about the the Owo massacre and the security situation in Nigeria.

A senior Nigerian lawyer, Femi Falana, has asked the Attorney General of the Federation, Abubakar Malami, to facilitate the withdrawal of false asset charges against suspended Chief Justice of Nigeria, Walter Onnoghen.

In a letter to the AGF dated February 3, Mr Falana is demanding that the charges against Mr Onnoghen be withdrawn to nullify the controversial suspension of the accused judicial officer, following an order of the Code of Conduct Tribunal on January, 25.

Mr Falana, a Senior Advocate of Nigeria, reiterated previous remarks that Mr Onnoghen’s suspension is illegal and asked Mr Malami to take advantage of the continuation of the matter on January 4, to correct the errors relating to the said suspension.

“Since the charge of false declaration of assets was filed against the Chief Justice of Nigeria, Justice Walter Onnoghen at the Code of Conduct Tribunal, by the Code of Conduct Bureau, I have repeatedly requested you to use your good offices to discontinue the case.

“My request was anchored on the case of Elelu-Habeeb v Attorney-General of the Federation & Ors (2012) 40 WRN 1 where the Supreme Court held that by virtue of Section 292 of the Constitution of Nigeria the head of any of the judicial arms of State and Federal Governments cannot be removed from office without a prior investigation conducted by the National Judicial Council.

“Having confirmed that you have since submitted a petition to the National Judicial Council alleging grave misconduct against the Chief Justice, I am compelled to request you, once again, to file a nolle prosequi to discontinue the charge pending against his Lordship at the Code of Conduct Tribunal without any further delay. The charge should not be allowed to hang like a Sword of Damocles on the head of the Chief Justice while he is being investigated by the National Judicial Council,” Mr Falana said.

Mr Falana said the suspension of Mr Onnoghen’s trial was necessary, in the face of the current petition written to the NJC. He further explained the implication of the desired suspension.

“As you are no doubt aware, the withdrawal of the case from the Code of Conduct Tribunal will lead to the immediate vacation of the ex parte order relied upon by President Mohammadu Buhari to justify the illegal suspension of the Chief Justice from office and the appointment of Justice Tanko Mohammad as Acting Chief Justice of Nigeria.

“Even though by virtue of Paragraph 10 (2) (a) of Part 1 of the Fifth Schedule to the 1999 Constitution (as amended) the Code of Conduct Tribunal is empowered to order any public officer to vacate office the power cannot be exercised until such a public officer has been tried and convicted for breaching the provisions of the code of conduct for pubic officers.

“But as a public officer cannot be removed from office on the basis of an ex parte order granted by any Court or Tribunal in Nigeria we urge you to advise President Buhari to reverse the suspension of the Chief Justice. Once the suspension is reversed Justice Walter Onnoghen will then be prevailed upon to resign as the Chief Justice having lost the moral authority to preside over the affairs on the juridical organ of the Government of the Federation.

“However, if his Lordship does not call it quits or if the National Judicial Council does not recommend his removal from office you may wish to exercise your powers under section 174 of the Constitution to prosecute him for failure to declare his assets which is a punishsble offence under the Code of Conduct Bureau and Tribunal Act. It may interest you to know that the decision of the Code of Conduct Tribunal which declared section 3 (d) of the Code of Conduct illegal and unconstitutional was affirmed by the Court of Appeal in Dr. Olubukola Saraki v Federal Republic of Nigeria (unreported) Appeal No CA/A/1/127C/16 in which judgment was delivered on 27th October 2016.