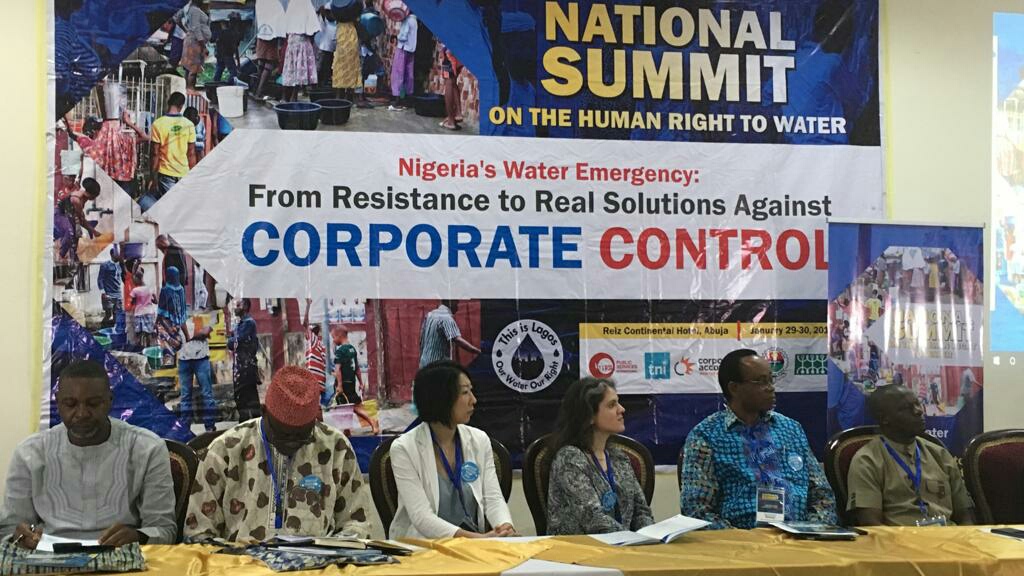 The two-day summit, which ended on Wednesday, was organised by the Environmental Rights Action/Friends of the Earth Nigeria (ERA/FoEN) in partnership with Corporate Accountability, Public Services International, Transnational Institute, and the Amalgamated Union of Public Corporations, Civil Service Technical and Recreational Services Employees (AUPCTRE).

The summit was themed ‘Nigeria’s Water Emergency: From Resistance to Real Solutions Against Corporate Control.’

A communique issued at the end of the event agreed that a review of the water policy is necessary to make it mandatory for all states to collaborate with local governments to ensure that adequate fund is made available to resuscitate all water facilities.

It also called on African governments to reject privatisation projects designed by the World Bank and its corporate partners, including the Public-Private Partnership success myth the bank is aggressively marketing in poor and developing countries.

“A probe of all PPP projects, loans and funding for the existing water system and infrastructure nationwide, including at the state level, particularly in Lagos State since the assumption of office by the Governor Akinwunmi Ambode administration and the new management of the Lagos Water Corporation,” part of the communiqué read.

Nigeria’s National Water Policy seeks the involvement of the private sector in the delivery of water services to improve the efficiency and sustainability of service delivery.

It also recognises the importance of creating an enabling environment for private sector participation in the water sector, while noting that a regulatory framework for the activities of water services providers is necessary to guarantee adequate protection of consumers.

But participants at the summit observed that there have been well-documented failures of private sector involvement from across the world. They advised the government to, instead, adopt a Public-Public Partnership model.

“The World Bank and corporate powers are intensifying the promotion of privatisation, which is a false solution to the gap in access to water in Nigeria and Africa,” the participants observed.

“Public-Private Partnerships in the water sector is a new form of colonialism aggressively marketed by the World Bank and its corporate partners, and defines success only in terms of profit to corporations rather than universal affordable water access.”

In his opening remarks at the summit, Nnimmo Bassey, an activist, suggested the continual building of grassroots political power to resist any form of water privatisation.

“There are strong lessons to learn from other African countries and elsewhere,” said Mr Bassey, chair of the board of ERA/FoEN.

“After tasting the bitter waters of privatisation, Gabon is being threatened with litigation as it plans to remunicipalise its water.

“Cameroon has taken back its water after decades of failed privatisation promises and is now subtly being pressured to go on that path again.”

Akinbode Oluwafemi, a deputy director at ERA/FoEN, said the Lagos Water Masterplan, like the National Water Policy, puts emphasis on water as a basic commodity that profit can be made from.

“We had no choice in 2015 but to organise and start the ‘Our Water Our Right’ campaign,” he said.

Abiodun Bakare, the Lagos state secretary of AUPCTRE, said the state government is deliberately running its water facilities aground to justify its plan to adopt PPP.

“The government has made up their mind that there is no other way out but the PPP,” Mr Bakare said.

He said the people’s active participation in politics is the solution to people-unfriendly government policies.

“If we do not manipulate the decision-making body of this country, we’ll always be at the back shouting,” said Mr Zambuk.