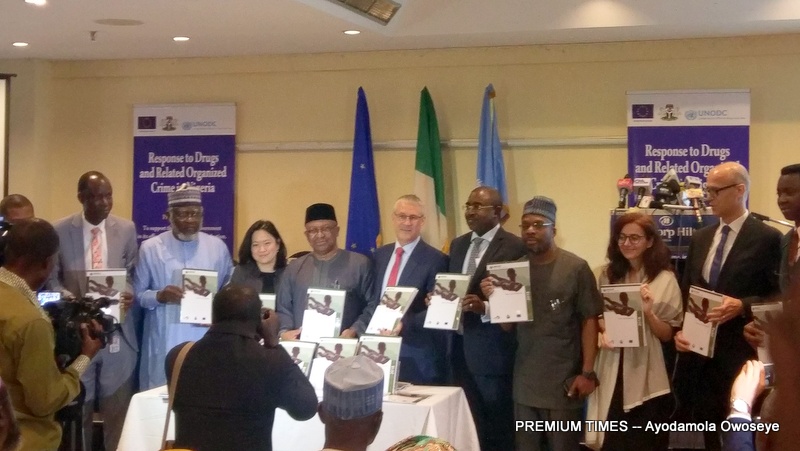 Following a report that about 14.3million people in Nigeria use drugs outside prescription, drug control experts have urged the authorities to improve on drug control policies in the country.

The report of the National Drug Survey Use released in Abuja on Tuesday showed that the number of drug users in Nigeria is higher than the entire population of some European countries.

The statistics showed that those involve in drug use are mainly between 15 and 64 years of age. One in every four them is also a woman.

The survey from which the report was written, was conducted by the United Nations Office on Drugs and Crime (UNODC), in collaboration with the National Bureau of Statistics (NBS) and Centre for Research and Information on Substance Abuse (CRISA). It was funded by the European Union.

he survey showed that the rate of drug use in Nigeria in 2018 is more than twice the global average of 5.3 percent.

According to the report, close to three million of the drug users are drug dependent and cannot access help due to lack of health facilities.

Speaking at the public presentation of the report, the Minister of State for Health, Osagie Ehanire, said drug use in Nigeria has become a public health challenge.

He said the extremely limited availability of drug counseling and treatment services has intensified the health crisis in the country.

Women drug users often do not get specialised attention in the country because most of the limited facilities are targeted at male drug users.

The survey is the first ever large scale nation-wide survey to examine the extent and pattern of drug use in the country. It involved 38,850 respondents in the household survey and 9,344 high-risk drug users across all states of the country.

The report provides for the first time, a robust data on the prevalence of drug use in Nigeria at the national level and also by geopolitical zones and states.

Mr Ehanire thanked UNODC and EU for supporting the Nigerian government to conduct the survey. He emphasised the importance of having statistically sound and relevant data on the extent and pattern of drug use, including high-risk drug use, to inform policy formulation and implementation.

He said the result has provided the government with the baseline information needed for the design and implementation of effective prevention, treatment and continuation of care services that are evidence-based.

He said the services will help reduce the demand for drugs and prevent the morbidity and mortality attributed to drug use in Nigeria.

“Some of the findings are striking and alarming and call for concerted efforts to mitigate the negative consequences of this rising menace on the health, socio-economic and security of our nation,” he said.

He said the ministry of health was paying attention to the issue of drug use and drug use disorders, and related health conditions as a major public health issue.

He said it was for this reason that the government established a Drug Demand Reduction Unit in the ministry, as part of efforts to coordinate and implement strategies that will lead to evidence-based drug prevention, treatment, and care.

It was noted from the report that most users are into non-medical use of prescription opioids such as tramadol and cough syrup (containing codeine or dextromethorphan).

It showed that people who inject drugs (PWID) constitute a sizeable proportion of high-risk drug users with pharmaceutical opioids, followed by cocaine and heroin as the commonly injected drugs.

About 4.6 million people use these drugs in last year in Nigeria.

These expose them to risk of deadly communicable disease such as HIV, and Hepatitis B and C, among other diseases.

The survey showed medically prescribed drugs were abused in the north while in the south it was more of cannabis.

This places Nigeria among countries with high estimates of non-medical opioid use globally. While cannabis is the most widely used drug globally and in Nigeria, opioids are responsible for most of the negative health impacts of drug use.

Also at the launch of the report were the heads of relevant agencies and NGOs working on drug abuse in the country.

The officials include the Chairman of the Presidential Advisory Committee on the Elimination of Drug Abuse, Buba Marwa; Chairman of National Drug Law Enforcement Agency, Muhammad Abdallah); and the Statistician-General of the Federation; Yemi Kale.

Others include the Deputy Head of Delegation of the European Union (EU) to Nigeria and ECOWAS, Richard Young; and the Director, Division for Operations, UNODC, Miwa Kato.

In his remark, Mr Marwa commended the findings of the survey. He said it will help the authorities find a way forward in the fight against drug abuse.

Mr Marwa said drug uses have become a major public health problem in the country and this cuts across cultures and ethnicity.

He said the fight against drug use must cut across all sections and there is a need for blockage of all channels of supplies.

“There are 58,000 registered medicine stores in the country but over million are operating illegally. The government needs to step up monitoring teams to regulate their activities,” he said.

He also called for more facilities to provide treatment for dependent drug users as most of the facilities available are private and expensive to access.

He said access to treatment in these facilities cost between N500,000 and N2 million per month.

Mrs Kato advised, however, that any response on prescription opioids should be mindful of the “need to recognise that they have a legitimate medical use”.

She said there is a need for a nuanced approach to the issue. “It is important to ensure that such prescription opioids are made readily available to those who have a medical need.”

The UNODC Director said the agency is ready to work with the government to “employ a balanced approach to drug control.”