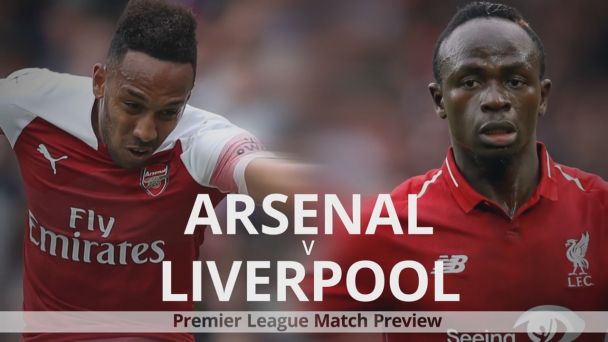 A titanic clash is expected at Anfield on Saturday as table toppers Liverpool take on Arsenal in a crucial Premier League tie.

The Reds are currently six points clear of Tottenham and seven ahead of Manchester City; meaning the EPL title is virtually theirs to lose.

As for the Gunners, they are two points off the top four with a chasing and rejuvenated Manchester United six points behind them.

The above scenarios give room for a fierce contest at Anfield as both teams need all the points they can get in every match.

In the reverse meeting between these two sides, the final score was 1-1 with Milner’s strike being cancelled out with a late equaliser from Lacazette in a fairly even game.

While the outcome of Saturday’s game may be difficult to predict, previous meetings suggest there should be goals to celebrate after 90 minutes.

Kick off at Anfield

Arsenal win the first throw in

Home or away it is now seven games unbeaten for Liverpool.. can they continue that fine run against the Gunners

Chance…Mohamed Salah misses with an attempt on goal.

Iwobi gets in a shot. Off target

Iwobi does well to set up the goal

Liverpool trying to get a quick equaliser.. they win a free kick

GOAL!! Roberto Frimino gets the equaliser

Another goal.. Frimino makes it 2-1 in favour of Liverpool

Scrappy defending by Arsenal.. Mane almost gets the third goal for Liverpool

Lucas Torreira of Arsenal down injured

More trouble for Arsenal as Liverpool win a penalty kick

Liverpool 4-1 Arsenal.. Iwobi and his teammates being torn apart

Half Time: Liverpool 4-1 Arsenal.. Two goals from Frimino and one each from Mane and Salah has seen the Reds cruising at Anfield

Already Shkodran Mustafi has been replaced with Laurent Koscielny.

Roberto Firmino of Liverpool FC smashes in a shot on target. The Arsenal keeper saves this time

Liverpool not slowing down despite the 4-1 lead over Arsenal

First change by Liverpool.. Jordan Henderson in for Sadio Mane

Penalty for Liverpool.. Frimino takes it and it’s a GOAL!!!

Lacazatte about to come in to help Arsenal

Liverpool players quite ruthless tonight.. not taking thier Feet off the pedal despite thier 5-1 lead

With Tottenham losing earlier today.. Liverpool are on course to open a nine-point gap at the top of the EPL table

Review of the Nigerian entertainment industry in 2018