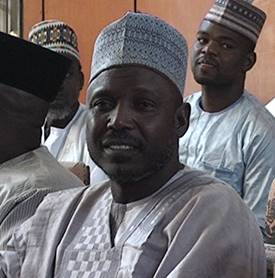 Ahmad Balarabe,, A deputy director with the Federal Character Commission

The Independent Corrupt Practices and Other Related Offences Commission (ICPC) has charged a deputy director with the Federal Character Commission, Ahmad Balarabe, to court for allegedly defrauding unsuspecting job seekers of N8.8 million.

The commission, in a two-count charge brought before Justice Bello Shinkafi, of the Zamfara State High Court, Gusau, said that Mr. Balarabe fraudulently collected huge sums of money from job seekers with a promise to employ them into the services of the Federal University, Gusau and other federal government agencies.

ICPC informed the court that the accused, while acting as the State Coordinator, FCC, in October, 2014, collected the N8.8 million from several job seekers including N970, 000.00 from one Lawali Sule Garba and his friends as financial commitment for processing their employments.

According to the Commission, his offence violates Section 1 (1) (a) of the Advance Fee Fraud and Other Related Offences Act, 2004 and punishable under Section 1 (3) of the same Act.

One of the counts read, “That you, Ahmad Balarabe, in October 2014 or thereabouts at Gusau, Zamfara State, whilst being the State Coordinator, Federal Character Commission, with the intent to defraud, did obtain by false pretense, the sum of N7, 700, 000.00 from unsuspecting job seekers under the guise of securing employment for them into the Federal University, Gusau, Zamfara State and you thereby committed an offence contrary to Section 1 (1)(a) and punishable under Section 1 (3) of the Advance Fee Fraud and Other Related Offences Act, 2004.

The deputy director who now heads Public Enlightenment, Media and Mobilisation Department of FCC, pleaded not guilty when the charge was read to him as his counsel, A. Abubakar, urged the court to grant him bail on liberal terms.

Counsel to ICPC, Mashkur Salisu, while agreeing that the accused be released on bail, urged the court to be mindful of the penalties for the offence which is a maximum of twenty years imprisonment.

He therefore prayed the court to ensure that the accused provided reasonable surety in line with the provisions of the law before he would be admitted to bail.

The trial judge, while ruling on the bail application, admitted the accused to bail in the sum of N20 million with two sureties in like sum. The sureties must have landed property in Gusau, valued at N30 million each. The bail conditions also required the accused to submit his international passport with the court.

Justice Bello ruled that Balarabe should be remanded in the Gusau Central Prison, pending the fulfillment of his bail conditions.