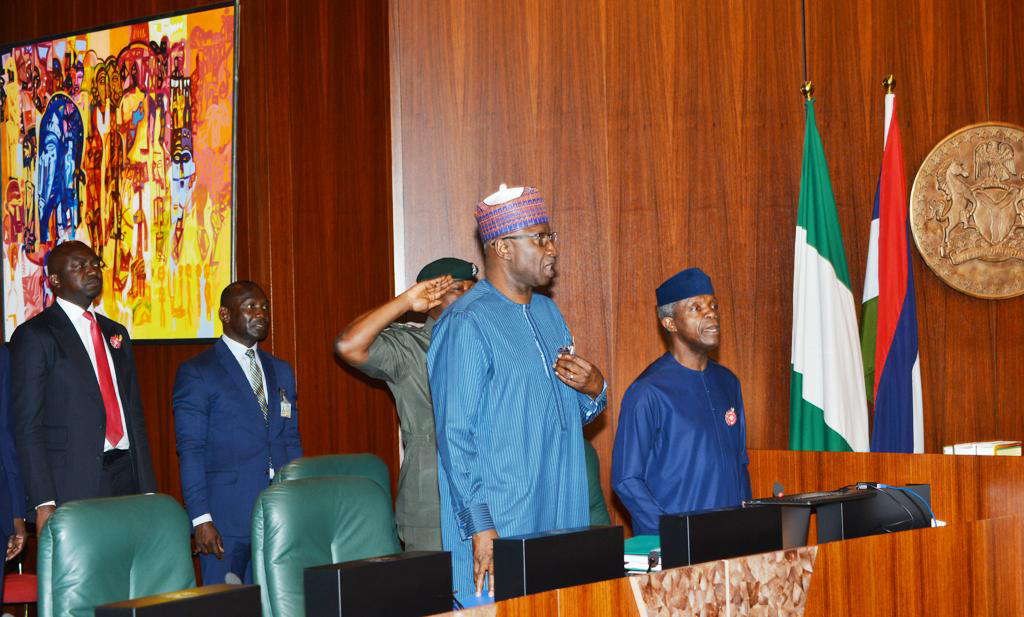 Pic.20. Vice President Yemi Osinbajo (R) with the Secretary to the Government of the Federation, Boss Mustapha (2nd R), during the Federal Executive Council meeting at the Presidential Villa in Abuja on Wednesday (28/11/18). 06103/28/11/2018/Sumaila Ibrahim/OTU/BJO/NAN

The Special Adviser to the President on Media and Publicity, Femi Adesina, said the council disclosed this Wednesday at the end of a meeting.

The meeting was chaired by Vice President Yemi Osinbajo.

The spokesman also listed the projects which he said were spread in the aforementioned states.

Another approval by FEC was the ‘business plan’ for ECOWAS Biometric Cards intended to replace the current ECOWAS Travel Certificate which is a contractor-financed project. This will cost N14.7 billion.

Meanwhile, the Minister of the Interior, Abdurahman Dambazzau, said the project was a recommendation of West African regional leaders since 2016 saying the current ECOWAS travel papers can easily be faked.

He said the biometric cards are expected to be issued to about 13 million persons over the next 19 years.

“To make it easier for Nigeria, the project will incorporate her National Identity Number (NIN). It is hoped that the new cards will help safeguard Nigeria’s borders,” he said.

Similarly, the Minister of State for Power, Works and Housing, Sulaiman Hassan, said the council approved two memos- the furnishing of the federal secretariat complexes in three states of the federation, Akwa in Anambra State, Gusau in Zamfara and Yenagoa in Bayelsa State at the cost of N3.5 billion.

“It is the duty of the federal ministry power, works and housing to provide decent accommodation for federal agencies and other offices in various states of the federation to make their working easier and more comfortable for better results.

“So these complexes have been completed and are ready for commission before the end of the year.”

The council also approved the rehabilitation of some bridges in the North-east region that were destroyed by insurgents at the cost of N813 million.

He said the first (bridge) is on the road between Maiduguri, Dikwa and Gamboru and the second is at the famous Limankara, that links Maiduguri to Dama, Goza, Honk and Yola.

“N331.2 billion has been allocated for the completion of the bridge while the bridge in Gombe State will cost N304 million,” he said.

“The total cost of the bridges’ rehabilitation is N813 million. The contractor is the Army Corps of Engineers that have a limited liability company, Sappers Engineering Limited.

”Why we gave to Sappers Engineering is because of the security concerns. No civil contractor will want to go there insecure,” Mr Hassan said.