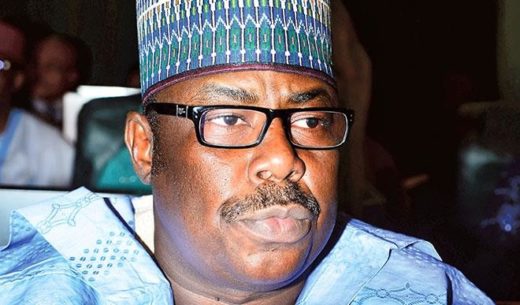 The Minister of State, Power, Works Housing, Mustapha Baba-Shehuri, on Tuesday joined the race for the All Progressives Congress (APC) governorship ticket in Borno State.

Mr. Baba-Shehuri, who is among 20 politicians angling to succeed Governor Kashim Shettima, under the flag of APC, said the core of his development plan for the state will be giving power to local governments.

He blamed the ongoing Boko Haram insurgency and the the rising cases of kidnapping by youth on what he called seizure of local government funds by state governments across Nigeria.

Speaking at a press conference shortly after submitting his nomination form at the APC state secretariat in Maiduguri, the minister said he would bring to bear his experience as a grassroots politician as well as the good leadership qualities he has learned from working with President Buhari.

According to him, the Boko Haram insurgency has robbed the people of Borno of their humanity, dignity, self-worth and means of livelihood.

He said his administration will not only strive to develop the local government areas, but also ensure that local councils get and remain in full control of their resources.

“The insurgency has destroyed virtually everything we had; our education system, health care facilities and sources of water have been destroyed and need to be urgently fixed,” he said.

“The major aim behind the creation of the third tier of government is for development to be taken down to the grassroots where majority of the people reside.

“But the reckless and unilateral usurpation of local government grants by state governments across the country has not only completely denied the local government areas the use of their legitimate funds to entrench development, but has also succeeded in strengthening the spirit of acrimony discontent and threat to our security.

“The usurpation of funds and general disempowerment are major cause of poverty, impoverishment and frustration

“If there is any population that is worst hit by this disaster, it is the people of the local government areas. And that is the story in all the places affected by the so called insurgency and cattle rustlings whose aim is to get money as ransoms.”

The minister said the above scenario has largely contributed to greater disenchantment of the rural people and most especially the youth whom he said are easily susceptible to criminal and extreme radical tendencies.

“The much needed inclusivity, sense of belonging and development expected from the creation of local government, being the third tier of government has not trickled down, thereby making it easy for our youth to be influenced into becoming ready recruits for perpetrating criminalities such as Boko Haram and kidnapping,” he said.

“I believe it is high time local government areas are allowed the use of their legitimate resources and developmental kits to develop their people and give them the needed sense of belonging, as well as the leverage to pursue the happiness of their people for progress, prosperity and socio-economic development.

“I call on the assemblage of lawmakers both at the state and federal level as well as the state government to draw lesson from this insurgency and allow the local government areas manage their resources.

“This shall be my commitment to the people of Borno state, and I shall ensure power is given back to the real people at the grassroots, while we concentrate in ensuring our displaced people are returned to their reclaimed communities in dignity and safety,”, he said.

Mr. Baba-Shehuri was once a ward councilor, then a local government council chairman, he later became a member of the Borno State House of Assembly, and afterwards elected member of the House of Representatives before Mr Buhari appointed him minister in 2015.