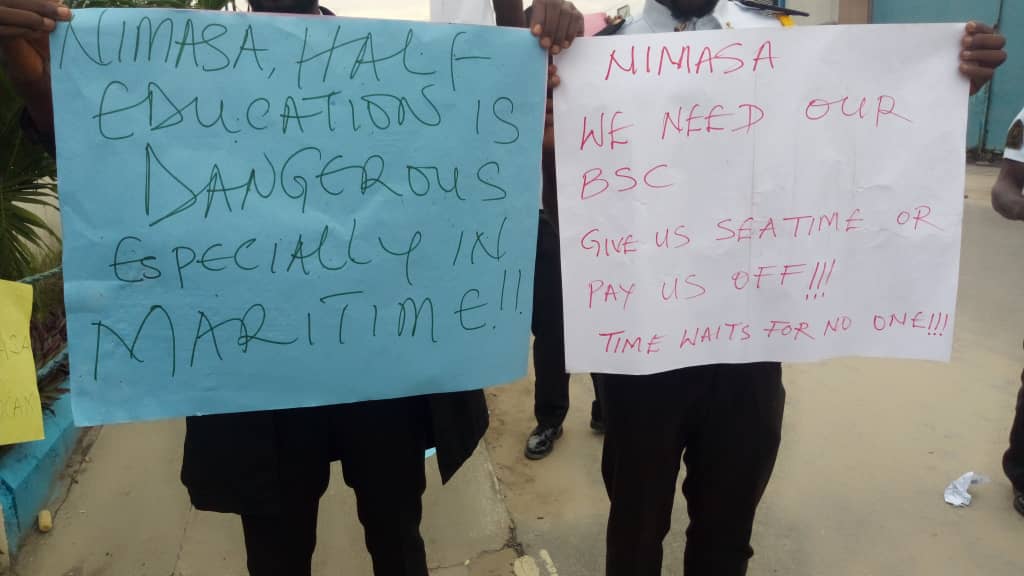 Some cadets of the Nigerian Seafarers Development Programme (NSDP) who were sponsored by the Nigerian Maritime Administration and Safety Agency (NIMASA) are protesting a three-year delay in sending them to a mandatory sea time training that will make them certified sailors.

No fewer than 50 placard-carrying cadets gathered at the headquarter NIMASA in Apapa, Lagos, on Monday morning chanting protest songs and accusing the agency of siphoning the fund earmarked for their training.

One of the protesting students, Onyankeke Adarigho, told journalists that they had been waiting unsuccessfully for three years to take the mandatory training despite endless unfulfilled promises by NIMASA.

Mr Adarigho said the protest will continue until the management of the agency responds to their demands.

“We came fully prepared. We came with food and three buses and we will not leave here until we get favourable answer from NIMASA,” he said.

“Year after year they have been claiming funds for our sea time training, yet nothing has been done. They succeeded in training 150 cadets in three years and they’ve turned down over 1000 bed spaces from different shipping companies and countries over the year. Our fate now is so slim yet on yearly basis budget is being passed for our training,” he added.

Some of the placards the cadets were carrying read: “NIMASA Half Education is Dangerous Especially in Maritime,” “NIMASA We Need Our BSC.” “Give US Seatime or Pay Us Off.”

He said the agency has not neglected any cadet requiring sea time training. He explained that those who have not receive their sea time training after the three years classroom programme will be attended to.

A few months ago, NIMASA’s director of maritime labour and cabotage services, Ibrahim Jubril said 700 cadets would get their sea time training before the end of the year.

He added that 89 cadets had been sent to the United Kingdom for sea time training while another 150 were sent to Egypt for the training.