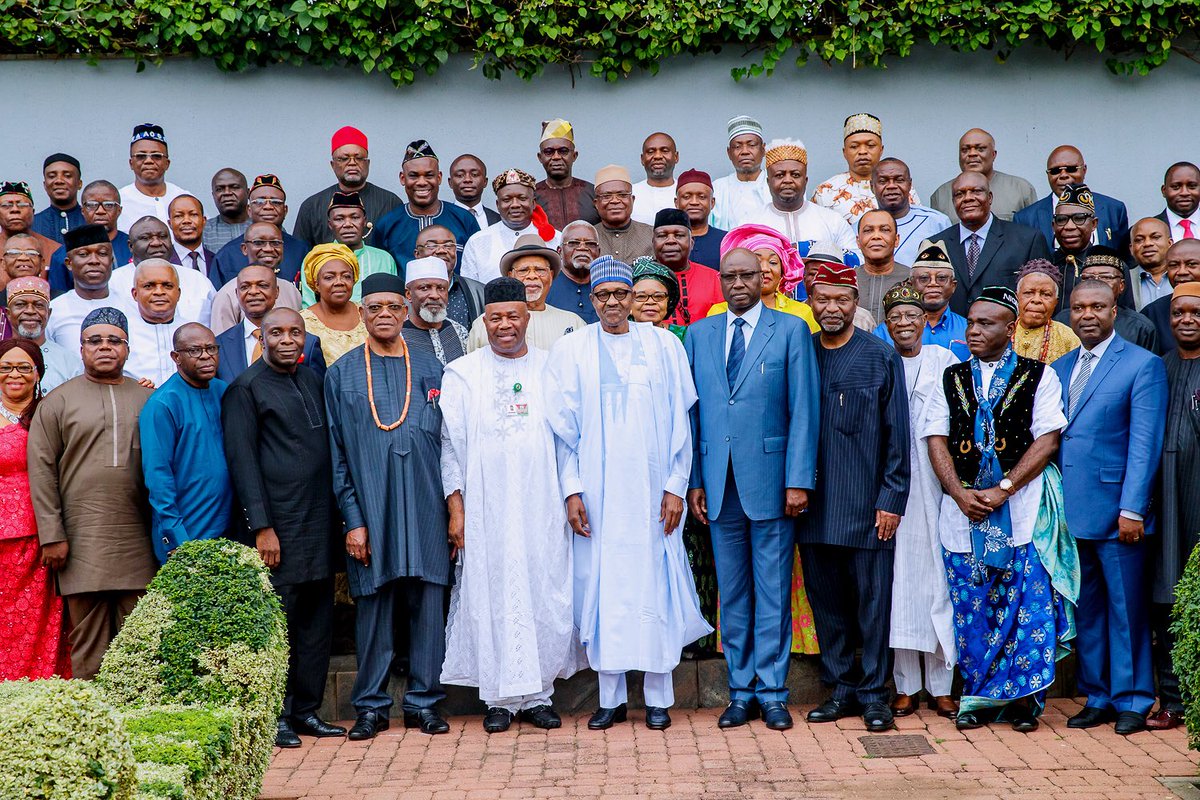 A crossection of Akwa Ibom Elders at the State House after a meeting with President Buhari [photo: Bashir Ahmad]

A delegation of the All Progressives Congress (APC) from Akwa Ibom on a visit to Aso Rock on Monday told President Muhammadu Buhari to do more to improve the lot of party members in the state.

The delegation, led by a former petroleum minister, Don Etiebet, was on a solidarity visit to Mr Buhari.

A senator from the state, Godswill Akpabio, the Managing Director, Niger Delta Development Commission (NDDC), Nsima Ekere, and the Managing Director of Oil and Gas Free Zones Authority (OGFZA), Umana Umana, were part of the visit, which was facilitated by the Senior Special Adviser to the President on National Assembly Matters (Senate), Ita Enang.

“Your Excellency, Akwa Ibom State is presently a PDP controlled state,” Mr Etiebet, who spoke on behalf of the delegation, told the president.

Mr Etiebet, however, told the president that the APC “has grown by leaps and bounds” in the state and that they were prepared to help him win the state in the 2019 presidential election.

The delegation praised the president for appointing Akwa Ibom people into numerous positions in the federal government, and also for the rehabilitation of some federal roads in the state.

The delegation also briefed the president on senator Akpabio’s defection from the PDP to the APC and other defections to the party.

“Akwa Ibom State over the past 19 years have been tagged as a PDP State but I want to tell you that with these latest decampments, Akwa Ibom State is now an APC State with promises of providing the focal point of APC in the South-South from now on,” Mr Etiebet said.

He added, “We will prove this very soon with the forthcoming general elections.”

President Buhari, in his response, informed the delegation that the federal government in 2019 will rehabilitate and convert the Ikot Ekpene – Aba federal highway into a dual carriage-way.

This, he said, was beside other federal road projects in the state which he said were ongoing.

“Thank you for appreciating the award of contract for the Dualization of Odukpani- Itu (spur to Ididep Itam) – Ikot Ekpene road in the initial contract sum of N54.17 Billion.

“We have provided N11 Billion in the 2018 budget for the award of the outstanding portion of the road in Akwa Ibom State and the federal ministry of power, works and housing has commenced the procurement process of this tranche.

“Two weeks ago, contract for the reconstruction of Abak- Ekparakwa- Ete-Ikot Abasi was awarded in the sum of N5.89 billion.

“The federal government has also provided for the Ibom deep seaport and city for which initial provision of N2.2 billion has been made in the 2018 budget.

“Again, contract for the construction and furnishing of the faculty of Law building at the main campus of the University of Uyo has been awarded in the sum of N873.1million,” the president said.

Meanwhile, a chieftain of the APC in Akwa Ibom, Boniface Akang, has derided the visit to the president as being a “mere jamboree”.

Mr Akang, who spoke with PREMIUM TIMES, Tuesday, said “the original members of the party, those who were part of the ACN were not fairly represented in the delegation”.

He said he didn’t see how the visit would help improve the electoral fortunes of the party ahead of the forthcoming general elections.

VIDEO: Laughter as Ambode runs toward Tinubu for photographs at book event