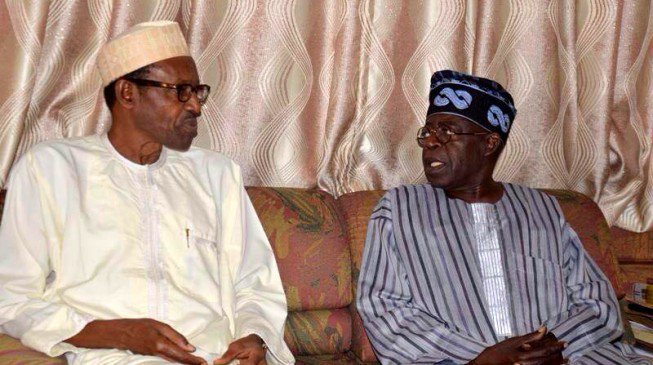 A national leader of All Progressives Congress (APC), Bola Tinubu, has alleged that some members of the National Assembly were planning to remove President Muhammadu Buhari.

But he warned the plotters to drop their sinister move because it is not “possible for a lizard to wrestle an antelope’’.

He described what is happening in the country now as a war between progressives and the conservatives.

“But they believe in sharing and looting the money.

“Today we are aspiring in our vision, but the PDP has no vision. They believe in sharing and looting the treasury.’’

Nigerians, he said, gave PDP 16 years to rule but the party failed.

“Today, Buhari says we must change; we must account for Nigeria’s money but they are resisting.’’

He expressed happiness that Akwa Ibom had embraced the change of Buhari.

With the present posture of the state, it “shall sweep the evil out with the broom’’.

Quoting the Bible, Mr Tinubu, a Muslim said: “The people in the city shall be swept away with brooms.’’

He praised the wife of Mr Akpabio, Ekaete, for her resilience and steadfastness in her support for her husband.

The Secretary to Government of the Federation, Boss Mustapha, who represented Acting President Yemi Osinbajo, told the people of President Muhammadu Buhari’s love for them.

He said that the facts on ground support the agitation for the return of Mr Buhari in 2019.

He explained that of the 36 ministers, 18 were Muslims and 18 Christians with the Christians holding many important positions.

Mr Mustapha, a Christian, explained that Vice President Osinbajo is a pastor. He named other key members of the government who are Christians to include governor of Central Bank of Nigeria; ministers of finance, petroleum, national planning; as well as the party’s national President.

He said that Mr Buhari was the only candidate who could generate 10 million votes unlike others that could not boast of 800 votes.