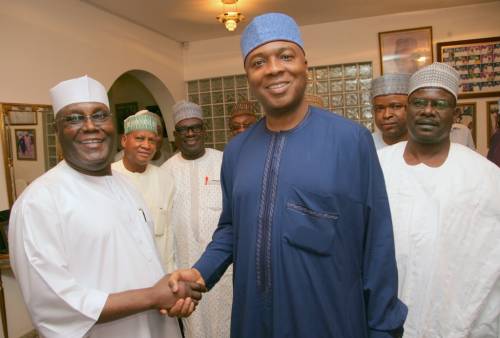 A former vice president of Nigeria, Atiku Abubakar, has welcomed the decision of Senate President Bukola Saraki to leave the All Progressives Congress, APC.

Mr Saraki on Tuesday left the APC for the main opposition party, PDP.

“I received the news that the Senate President, Bukola Saraki, has resigned from the All Progressives Congress, with great joy,” Mr Abubakar, a PDP presidential hopeful said.

“Senator Saraki’s ordeal at the hand of the All Progressives Congress is all too familiar to lovers of democracy in Nigeria and around the world. Leaving a party which maliciously prosecuted him and subjected him to the most degrading treatment, notwithstanding his status as the nation’s number three citizen, took courage, and I commend him.”

Mr Abubakar said, “What the APC did to Senator Saraki is what they have also done to Nigeria as a nation. They have degraded our democracy and our economy.

“Bukola Saraki is a product of the Peoples Democratic Party, under whose banner he became a Presidential Adviser, Governor and Senator. The PDP’s ideology and political philosophy is conducive to Senator Saraki’s political leaning.

“I therefore not only welcome Senator Saraki’s resignation from the APC, I also urge him to go one step further and join the only party capable of enshrining genuine democracy in Nigeria as well as lasting economic progress. I urge Senator Saraki to join our great party, the Peoples Democratic Party.