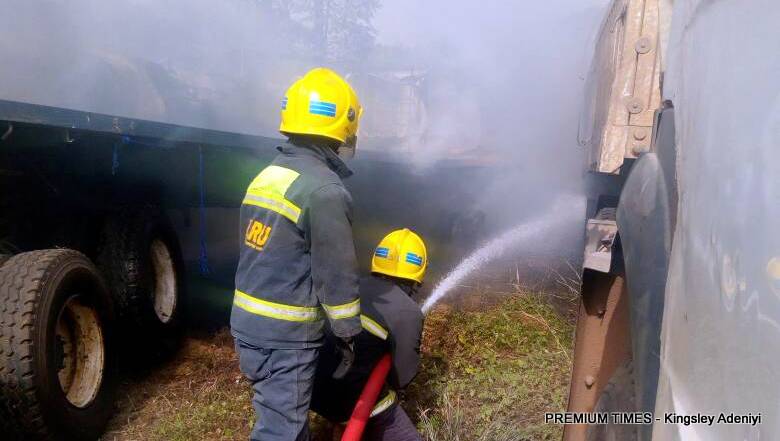 Fire service trying to put off the fire at the Lagos warehouse.

The House of Representatives on Wednesday, said it would investigate the status of the N2.8 billion appropriated for the Federal Fire Service in the 2011 budget.

This was sequel to a motion by Ayeola Abayomi (Lagos-APC) on the need to unravel the mystery behind the withheld fund at the plenary in Abuja.

He said the House was at a loss over the whereabouts of the money; hence, there was a need to investigate the utilisation or non-utilisation of the N2.8 billion.

He said investigation became imperative, considering the rising number of lives and property lost to fire in some parts of the country.

”Besides, the confusion over the status of the fund on whether it was not released or misappropriated made the investigation more imperative,” Mr Abayomi said.

He said it was disheartening that “the federal fire service is in a terrible condition, being poorly equipped and thus cannot respond to its current challenges.

“In 2011, N2.8 billion was appropriated for the federal fire service to purchase trucks and equipment.

“But till date, the money has not been released, hence the need to probe the whereabouts of the money.

“Only 15 out of the 36 states of the federation have functioning fire services, this exposes people of the 21 states to the consequences of an inferno.”

Mr Abayomi said there had been several fire disasters in public places “such as the Ogbete main Market, Enugu in which 35 shops were destroyed in November 2017.”

He also recalled that in 2016, during the Sabon Gari Market inferno in Kano, 3,800 shops were razed by fire.

“The National Association of Nigerian Traders said that in the last 17 years, traders lost about N5.3 billion to fire disasters.

“Oftentimes, people do not give the right of way to fire trucks to pass in the course of a fire incident.

“In many cases, buildings have been arbitrarily erected in streets, thereby obstructing fire trucks from reaching burning buildings.”

However, attempt by the Deputy Minority Leader, Chukwuka Onyema, to discourage the House from proceeding with the investigation was rebuffed.

Mr Onyema said his argument was based on the fact that the non-release of the fund took place before the timeline of the current House, a development he said had limited the powers of the House.

The motion was unanimously adopted after it was put to a voice vote by the Speaker, Yakubu Dogara.

Mr Dogara then referred the matter to the Committee on Interior for investigation.

Macron in Lagos: My view of Africa differs from that of many Europeans