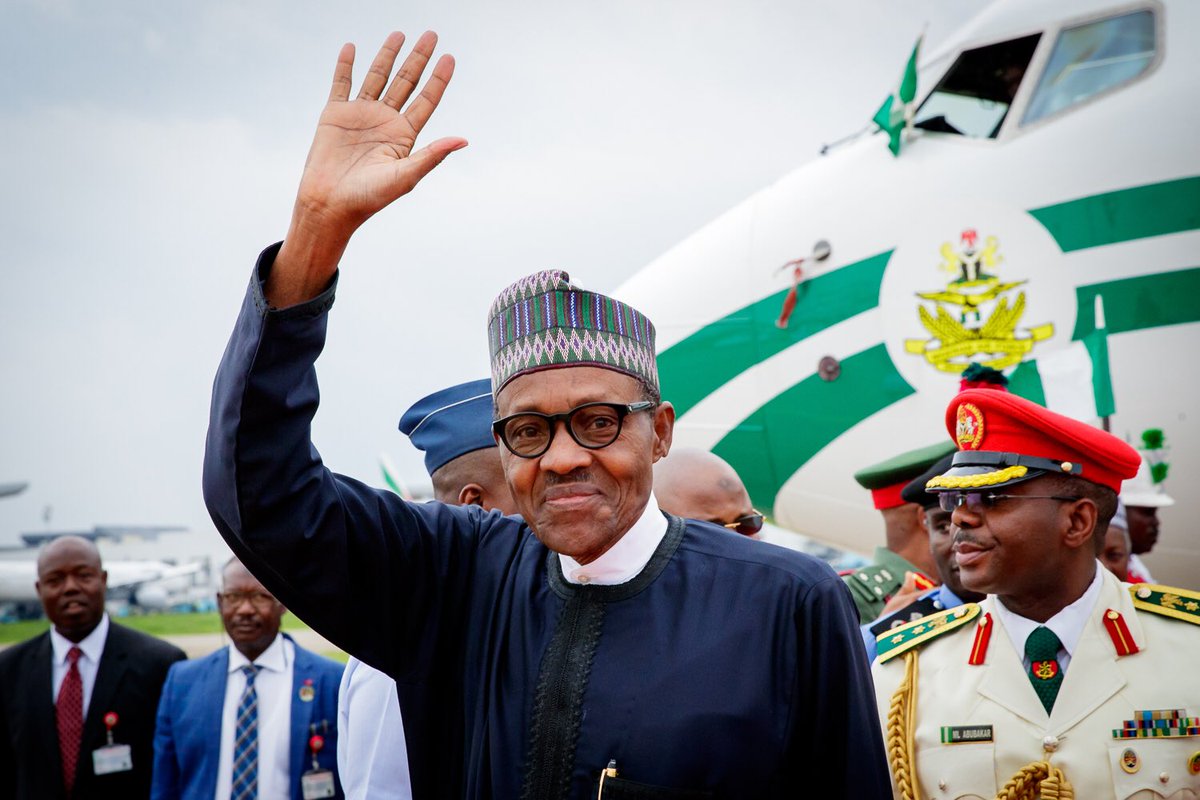 President Muhammadu Buhari has returned to Abuja after two-day official visit to Morocco where he was received and accorded `five-star’ Royal reception by the Moroccan leader, King Mohammed VI.

The presidential aircraft conveying the President and some members of his entourage back home from Rabat, Morocco, landed at the presidential wing of the Nnamdi Azikiwe International Airport, Abuja, at about 5.15p.m.

The News Agency of Nigeria (NAN) reports that Governors of Ebonyi and Jigawa, Dave Umahi and Badaru Abubakar respectively who were part of the president’s entourage to Morocco; the Inspector-General of Police, Ibrahim Idris and other top government functionaries lined up to receive President Buhari at the airport.

While in Morocco, Mr Buhari and King Mohammed VI of Morocco held bilateral talks where Nigeria and the Kingdom of Morocco signed three agreements, which included a regional gas pipeline that will see Nigeria providing gas to countries in West Africa sub-region that extend to Morocco and Europe.

The 5,660 km long Nigeria-Morocco Gas Pipeline (NMGP) will reduce gas flaring in Nigeria, encourage diversification of energy resources and cut down poverty through the creation of more job opportunities.

The NMGP will further encourage utilisation of gas in the sub-region for cooking, and discourage desertification.

In a communiqué issued at the end of the two-day president’s official visit, Nigeria and the Kingdom of Morocco affirmed their will to create South-South cooperation model.

To this end, the two countries welcomed the significant progress made in various areas of cooperation, such as agriculture, fertiliser production, energy infrastructure and mining.

The communique, which was issued in Abuja on Monday, said King Mohammed VI and Mr Buhari had noted with satisfaction the milestones achieved and underscored their commitment to the agreement signed on the Regional Gas Pipeline.

The pipeline will connect Nigeria’s gas resources, those of some West African countries and Morocco, thereby fostering integration and development of countries in the West African region.

The two Heads of State also noted progress made in other areas of the bilateral cooperation, as evidenced by the Agreement between OCP of Morocco and the Fertiliser Producers and Suppliers Association of Nigeria to invest in fertiliser production.

They noted that already the Memorandum of Understanding between OCP and the Nigeria Sovereign Investment Authority on the establishment of a Basic Chemicals Platform, specifically to develop a significant Ammonia Production Plant had been signed.

”On the basis of their exemplary cooperation, the two Heads of State agreed to develop a partnership in the field of agriculture, particularly through the signing of Cooperation Agreement on vocational training and technical supervision,” the two leaders said.

Mr Buhari congratulated King Mohammed VI on Morocco’s election to the Peace and Security Council of the African Union.

He also congratulated him on the successful completion of his mandate as African Leader on Migration Issues.

On his part, Mr Mohammed congratulated Mr Buhari for his leadership in the regional initiative against terrorism in the Lake Chad region.

He also lauded his efforts in the fight against corruption and his role as the African Union anti-corruption champion.

The two heads of state, in the spirit of the holy month of Ramadan, according to the communique, underscored their commitment to moderation, tolerance and peaceful coexistence, as taught by Islam.

The two leaders also expressed deep concerns about violent extremism, terrorism and the persistence of security threats in Africa.

They affirmed their resolve to strengthen cooperation in efforts to combat radicalisation in Africa and beyond.

”The visit reinforces the positive bilateral relationship between Morocco and Nigeria since the Royal Visit to Abuja in December 2016.

”At the end of the working visit, President Buhari, on behalf of his delegation, expressed his deep appreciation for the warm reception and hospitality of His Majesty King Mohammed VI, the government and the brotherly people of Morocco,” the communique said.

Mr Buhari also met with the Prime Minister of the Kingdom of Morocco, Saadeddine Othmani, at the Royal Guest Palace, Rabat, Morocco, on Monday.

At the meeting, the president said, “Nigeria’s strongest selling point remains an “intellectually aggressive and economically ambitious’’ populace that always seeks self-improvement and self-actualisation in any part of the world.’’

Mr Buhari also met with the head of the Moroccan legislature, Habib El Malki and the President of the Advisers on Commerce, Ben Chemmas.

The Nigerian leader ended his two-day visit to the Kingdom of Morocco with a visit to the mausoleum where he laid wreaths on the tombs of past kings.