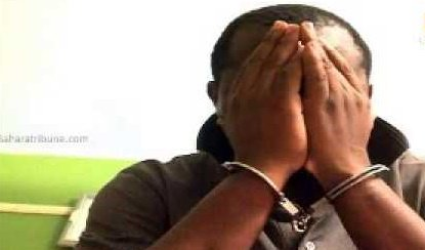 One of those arrested (Photo Credit: nyasatimes)

A Nigerian has been arrested by the Malawian police after illicit drugs were found in his home during a raid.

According to a report published by Nyasatimes, a news portal in Malawi, police operatives dealing with the epidemic of illegal drugs and substance trade across the country, arrested the Nigerian, Julian Ihumos, a resident of Area 47 in Lilongwe, Malawi. He was arrested on Sunday.

In a statement by the Lilongwe police spokesperson, Kingsley Dandaula, the police confirmed that the suspected substance has been seized.

The arrest follows that of another Nigerian, Alex Ojukwu, nicknamed Old Man, the paper reported. The paper did not provide the day Mr Ojukwu was arrested.

Mr Ojukwu reportedly confessed to have bought an air ticket for Riyadh Randera, 26, who died in Brazil recently.

According to reports, Mr Randera swallowed condoms filled with cocaine to evade security but the condoms burst in him.

Nyasatimes quotes the head of the Nigerian community in Malawi, Ken Nwosu, as calling on the Malawi government to impose stiff punishment on drug traffickers.