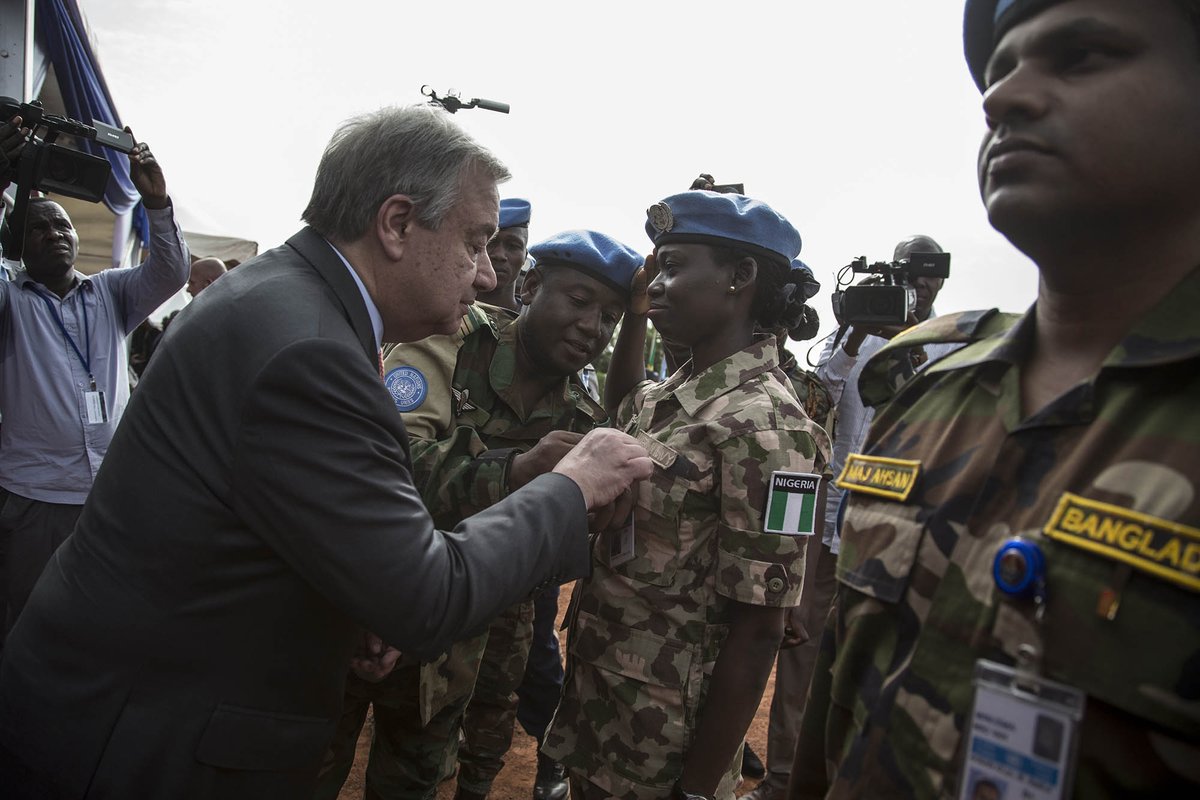 The UN Secretary-General, Antonio Guterres, has awarded a medal to a Nigerian peacekeeper, Olufunmilayo Amodu, serving with the UN Stabilisation Mission in Mali (MINUSMA) for her outstanding service.

The medal is an acknowledgement of the contribution of Nigeria to UN Peacekeeping Operations to ensure global peace and security.

Mr Guterres also awarded a medal to appreciate the outstanding service of Mohammad Khan from Bangladesh, a military staff officer based at MINUSMA Force headquarters.

The decoration was part of activities to honour the service and sacrifice of peacekeepers around the world to mark the 2018 International Day of UN Peacekeepers.

The News Agency of Nigeria (NAN) reports that the UN will also honour three fallen Nigerian peacekeepers at the event on June 1, at the UN headquarters in New York.

They are Lt. Col Ali Suleiman, who served with the UN Organisation Stabilisation Mission in the Democratic Republic of the Congo.

Others are Warrant Officer Remmy Amakwe, who was deployed with the African Union–United Nations Mission in Darfur; and Kolawole Shogaolu, who served in a civilian capacity in the UN Multidimensional Integrated Stabilisation Mission in Mali.

Speaking after receiving the award, Ms Amodu said: “The medal is very important. It symbolises what it is to be a peacekeeper at MINUSMA. Receiving it from the Secretary-General is a very unique privilege.”

“The terrorists are not relenting in what they are doing. And obviously, we are not backing out in what we have come to do,” she added, underscoring the worrying security situation in Mali.

She further said: “The UN is all about peace. And when there is peace, there is development.

“And for any person who would want to join MINUSMA, you should have at the back of your mind that when you are coming, it is to support the peace process.”

NAN reports that more than one million men and women have served under the UN flag, saving countless lives just as over 3,700 blue helmets have paid the ultimate price over the past seven decades.

Troops with the mission have increasingly become the target of attacks.

Meanwhile, Mr Guterres attended a ceremony at MINUSMA’s base in Bamako where he paid tribute to fallen peacekeepers and laid a wreath at the memorial inside the camp, engraved with the names of those killed in the service of peace.

“Dear peacekeepers, you have demonstrated that you are capable of all forms of sacrifice. For many of your colleagues, this has meant the supreme sacrifice of giving their lives to protect the lives of Malian civilians.

“I want to thank you very much for this effort; these sacrifices, to pay tribute to you, and to say how proud I am to work with you.

“As peacekeepers, you are the foremost symbol of the United Nations itself,” Mr Guterres said.

Also, Mahamat Annadif, the Special Representative of the Secretary-General in Mali and Head of MINUSMA, said that honouring the fallen “warms the hearts of their comrades and encourages us to continue to defend even more resolutely the values ​​of the United Nations.”

Mr Guterres was accompanied on his visit to Mali by Under Secretary-General for Field Support, Atul Khare, Head of UN Peacekeeping Operations, Jean-Pierre Lacroix, and the Executive Director of UN Children’s Fund, Henrietta Fore.

He was received at the airport by Malian President Ibrahim Keita.

He was also scheduled to meet with Keita and other Malian officials as well as UN officials working in the country.

UN has declared the north-west African country as the most dangerous place in the world to be a ‘blue helmet’ as 21 troops and seven civilians serving with MINUSMA died in 2017. (NAN)