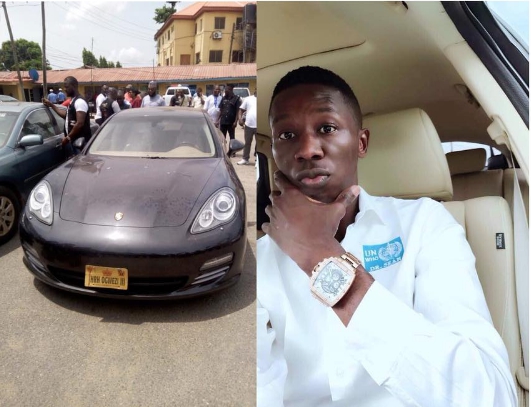 The suspect pictured alongside the retrieved Porsche Car Photo-todaynaija blog

A Nigerian medical doctor, Michael Thompson Williams Ujowhzi, has reportedly confessed to hacking into the accounts of popular celebrities.

Michael, who boasted of his escapades as a hacker, was quoted as telling the police that “I monitor movie actors and actresses in the US. I monitor a particular actor, who is based in America (US). He transfers money every week.

“I hacked into his Swiss code account, which involved breaking of 360 codes. I divert funds online into a secured credit card which I use to buy any kind of powerful software online and get more knowledge online.”

The 28-year-old suspect who had worked with frontline hospitals in Lagos, like Eko Hospital and Tolu Medical Centre, was arrested in Lekki area of Lagos and paraded at the Lagos police headquarters, Ikeja, on Monday, the Guardian newspaper reported.

During the parade, the suspect said he usually hacked into customers’ accounts with banks and financial institutions. He said he also monitors private email messages of prominent Nigerians.

He added that he had access to customers’ bank accounts and used their money for spending sprees with his credit cards.

He also said as a hacker, he could do anything online, adding that he bought goods worth not more than N30 million with credit cards and made false payments in bits to unsuspecting victims.

“Banks in Nigeria are not like banks abroad. In Nigeria, you can sit down and do any kind of transfer. There are no certified hackers in banks here; there is nobody to secure you.”

The police chief said, “After a successful transaction, the suspect as gathered would buy posh cars, sending fake alerts to the owners. The bubble burst in March after he bought a Porsche car worth N28 million from a car dealer in Lagos and sent him a fake alert before making away with the car.”

However, on getting to the bank to collect the money, the car dealer, Abidogun Adewale, discovered that no amount was paid.

Asked how that was possible, the suspect said he used “HTTPtunnel.com to send such fake alert”.

He disclosed that during such payment, the amount would appear on the seller’s account at that moment, even if he visited his bank to confirm the payment, adding that it would disappear after one hour.

Three of the vehicles he bought through such process were traced to Asaba, Delta State, and Owerri, Imo State. The number plates on the three vehicles read HRM OGUEZI 1, II and III, respectively.

Mr Edgal said the police received a petition against the suspect, whom he described as a “professional hacker.”

He said, “My office received a complaint that there is a syndicate that buys exotic cars and configures a computer programme that sends a fake payment alert to the seller.

“The seller, upon receiving this alert, verifies the alert either through ATM or through Internet banking and then releases the car to the syndicate.

“In this case, when the car dealer went to his bank for his statement of account, it was discovered that the alert and transfer of N28m to his account was only a fake electronic transfer; the money did not register in his account.

“The modus operandi of this suspect is very interesting because he seems to have a very good mastery of the cyber environment. He also creates a credit card through software known as cyber-ghost 12.

“When the credit card matures, it is then funded through a hacked Swiss account. Any transaction anybody is doing through this Swiss account, the suspect manipulates it and wires the fund into his contrived credit card.

“The interesting part of this report is that the hacker has the ability to shut down the CCTV system of any organisation here in Nigeria for a period of 67 minutes. That is a window period during which any crime can be committed.”

The police chief said the case was of importance to financial institutions, adding that Nigerian banks should employ ‘certified hackers’ to secure their systems from hackers.

He added that further interrogation of the suspect would continue to lead to more information of crimes he could commit through the Internet.

The suspect said he was eased out of the medical profession after he discovered “a faster way of conducting Caesarean Section.”

He said, “I have worked in three Lagos hospitals. The issue with Nigeria is that when they see that you are better, they look for a way to ease you out. After I was sent out, I secured a visa to Canada, where I acquired hacking expertise.”

He said his mode of operation involved, “creating a credit card or getting old credit cards online and funding them after monitoring transactions of Swiss code accounts of anybody making $1 million or above $200 million transaction.

Facebook has ‘done a better job’ in recent elections – Zuckerberg