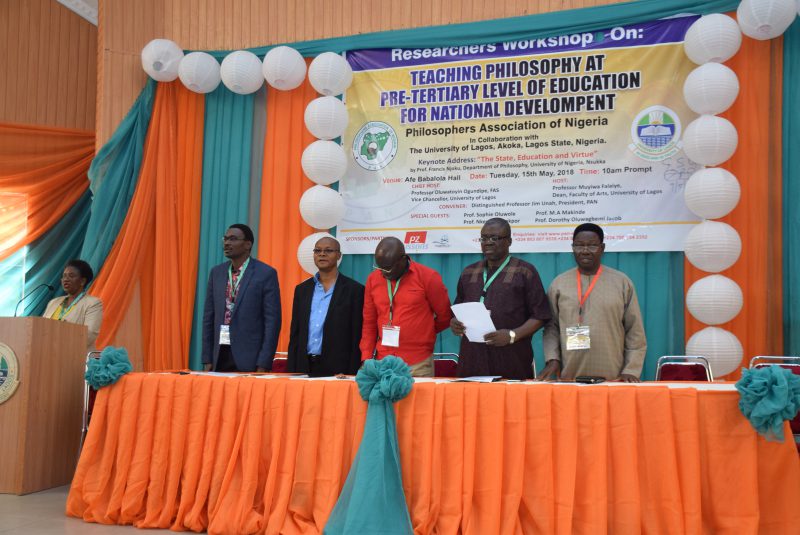 Teaching philosophy can address some of Nigeria’s challenges – PAN

The Philosophers Association of Nigeria (PAN) says pupils should be taught philosophy for national development.

This was the subject of a researchers’ workshop organised by the association at the University of Lagos (UNILAG) on Tuesday.

The event was chaired by Muyiwa Falaiye, head, department of philosophy, UNILAG, and had in attendance eminent lecturers across the country.

Jim Unah, president of the PAN, said when philosophy is introduced to secondary schools, it will impact the knowledge of critical thinking on the pupils, adding that the idea is to embed ethics into their curriculum

“The thing we are trying to do is not novel. That is, we are not trying to do something that has not been done elsewhere. It is because we have not done it here that the whole place is in turmoil. If you don’t have character and you become a leader, what are you going to give to the society? If you are a pickpocket and you become a governor, that doesn’t stop you from being a pickpocket. You have a bigger pocket to pick. That is the treasury.

“What is the use of accounting and mathematics if you are decayed in character? What we have found in our society is that the more brilliant the accountants you train, the greater the frauds that are perpetrated in the industry. So, where is the virtue? What is the purpose of producing a first class accountant? It is because there is no character.”

According to Adeolu Oyekan, public relations officer of PAN, the essence of the workshop is to see how philosophy can address some of the challenges of the nation. He said that the association feels very strongly that one of the best ways to do this is to begin to teach philosophy at the pre-tertiary level.

“There is an attitude to philosophy in a country like Nigeria which seems not to recognise the full importance of that discipline. There’s no society that makes progress without having a firm grasp of philosophy. In other societies where people make progress, where there is moral development, where you have citizens with strong sense of patriotism, you see pupils learning philosophy right from their kindergarten age. So, what we are trying to do is to see how we can begin to teach philosophy to our kids.

“We need to begin to teach our children values and how to cohabit with one another. It will help solve the problem of ethnic and religious conflicts in this country. We need to teach them morals and principles that will help us address corruption.

“Instead of just teaching philosophy to students when they come in to the university at a time that they have formed a habit to a large extent, we feel it is important we start teaching these values at a very early age so that our kids can grow up and live as right citizens. Eventually, they will not just be right citizens; some of them will emerge as right leaders and our society will continue to get it right from that level.”