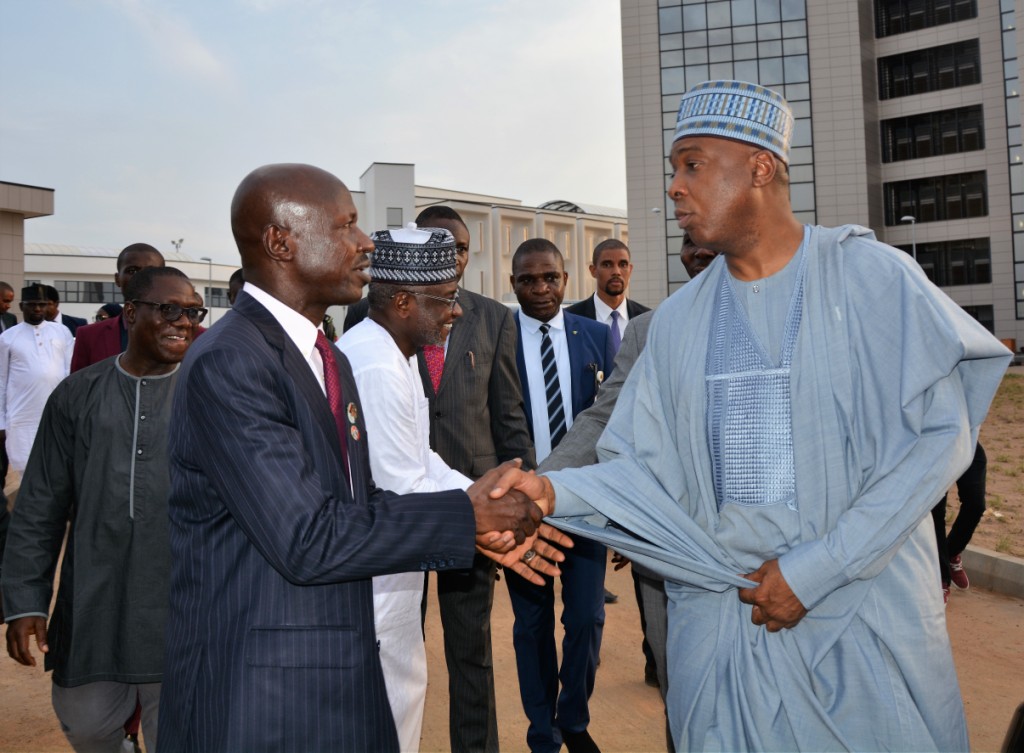 The Senate President, Bukola Saraki, on Tuesday visited the new headquarters of the Economic and Financial Crimes Commission (EFCC), and said he will continue to support efforts to build and strengthen the nation’s institutions.

According to a statement by his Chief Press Secretary, Sanni Onogu, in Abuja, Mr Saraki said he was particularly impressed by the quality of work done and the fact the the building was designed by a Nigerian architect.

He said he is duty bound to visit the completed project as part of his oversight functions in view of the contributions of the National Assembly to its realisation.

Speaking with journalists after a tour of the edifice, he stressed that strengthening such institutions will help the nation tackle corruption.

“If you look at most projects in Abuja, I don’t think any project like this has been well-funded and that shows that despite all the noise you will hear, the National Assembly has supported where it matters because this is where it matters and I think we have done that.

“If you look at what has been achieved in the last two and half years in putting this building up and bringing it to completion, I think it is a remarkable achievement.

“We might disagree on what those right things are but at the end, we must ensure that we build institutions, we support institutions and do what is right and we must continue to do that,” he said.

The lawmaker said that the fight against corruption must continue in order to bequeath a better future to both present and up coming generations.

“I think we have all said it. Corruption is something we must fight,” he said. “There is no way you can build a society without fighting corruption.

When asked what the completion of the building means for continuity in governance for the country, he said: “That is why I keep saying it is not about individuals, it is about institutions and this is what we have shown here.

“I think the project has gone through about three Executive Chairmen and one did not come in to say this is not my project and I must not continue. Each one has taken it as his own project.

“I think that is good and that is the whole point that is important and this is something we will be proud of for many years.

“In many years to come, I hope that we don’t have corruption in an environment like this but for now, I think there are many good aspects of this.”

The National Assembly has been at loggerheads with the Executive since it rejected Ibrahim Magu’s nomination as the chairman of EFCC.

Mr. Magu was nominated by President Muhammadu Buhari twice. Both times, the Senate rejected the nomination.

The senate president had earlier said contrary to insinuations, the Senate had no premeditated plan to reject Mr Magu as chairman of EFCC.

According to him, Mr Magu’s rejection was prompted by report from the State Security Service, among other issues, and the screening was aired “live’’ on national television for all Nigerians to watch.

He also said the rejection was in the interest of the nation’s democracy.

Mr Magu, who is still the acting chairman of the EFCC, while appreciating Mr Saraki and his entourage, said the project wouldn’t have been a reality without the support of the legislators, according to a statement by the commission.

BOKO HARAM: Why I will never return home – Widowed mother of eight