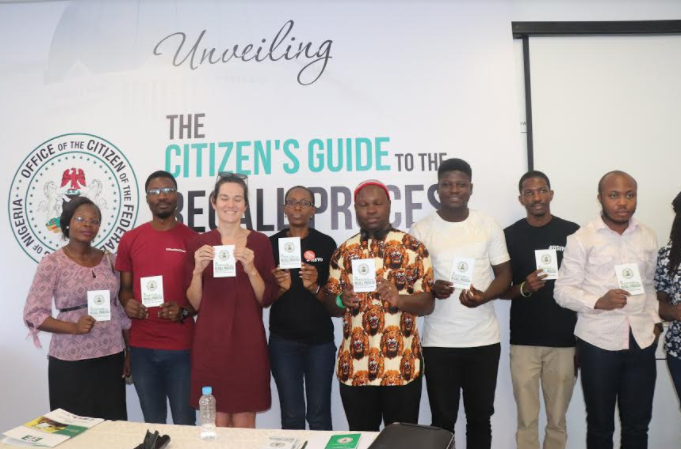 A Nigerian public advocacy organisation, Enough is Enough (EiE) Nigeria, on Thursday launched a guide on the recall process.

According to Yemi Adamolekun, executive director of EiE, the guide is to educate citizens on their constitutional right to recall a legislator who does not represent them satisfactorily.

The manual, titled “The citizen’s guide to the recall process”, was presented in a media chat with journalists at the Civic Hive, Yaba, Lagos.

It details the constitutional power of citizens to remove members of the legislature before the expiration of their term, as a means of affirming the power of the citizen.

In her speech, Ms Adamolekun, affirmed that the highest office the land is the ‘Office of the Citizen’ but Nigerian voters do not maximise their powers.

She explained that like the three arms of government, the citizens too have some form of checks on their lawmakers.

“It is important for citizens to know that they have an avenue to replace their representation at the legislative chambers in between the election cycle.

“Rather than using their constitutional power to recall irresponsible legislators, citizens have taken to violent reactions as seen in recent times where constituents attack their representatives.

“In the 8th assembly alone, we have recorded at least five attempts by constituents to recall a legislator. Of all these cases, only that of the senator representing Kogi west (Dino Melaye) seems to have scaled the first hurdle of submitting a petition to INEC.”

“However, nine months later with several court injunctions, the process is just moving to the second stage of verifying the signatures of the constituents.

On his part, Cheta Nwanze, a member of the EiE advisory board, noted that the recall process would become more effective once one of the processes initiated against some of the lawmakers sail through.

He said it would deepen the democratic culture as it would become the reference point.

Itse Sagay, chairman of the Presidential Advisory Committee Against Corruption, who wrote the foreword to the guide, said, “The negative conduct of our lawmakers since 1999 has simply been overwhelming. The only control and source of relief left to voters is the ability to recall a gravely erring legislator.”

2019: Soyinka urges Nigerian youth to be wary of old politicians