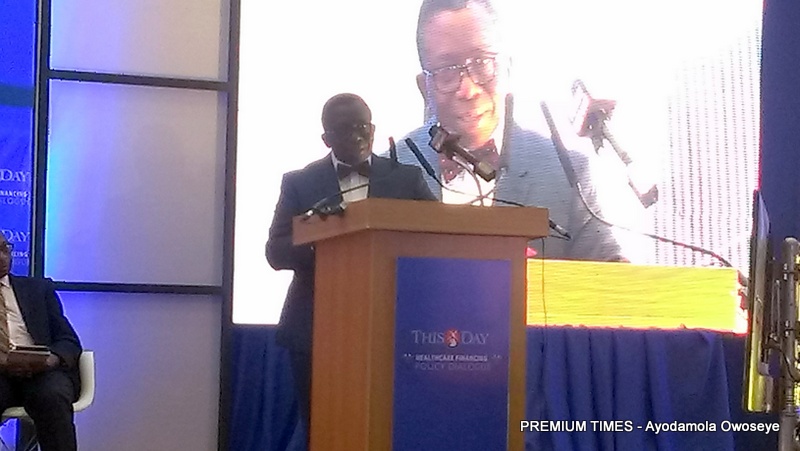 Health financing, funding and the rising cost of healthcare in Nigeria were on the front burner at Tuesday’s summit on ‎provision of quality healthcare for Nigerians.

The event on improved healthcare financing model for a sustained investment in the health sector was put together by THISDAY newspaper in conjunction with the World Bank Group.

Health experts, journalists, members of NGOs, government officials and individuals converged at the Atiku Abubakar auditorium inside the Musa Yar’Adua Centre, the venue of the event, to interface with a panel headlined by World Bank Officials; Minister of Health, Isaac Adewole; Lanre Tejuosho, the Chairman of Senate Committee on Health among other policy makers.

PREMIUM TIMES brings you four takeaways from the discussions:

John Enoh who chairs the Senate Committee on Finance was the first to speak on the move by the Senate to include the Basic Health Care Provision Fund in the 2018 budget.

Mr. Enoh said there is no provision yet for it in the 2018 budget. “We are quite hopeful that will be done before the budget is appropriated.”

He further said inclusion of the Basic health Care Fund is not the main issue but its implementation.

Mr. Tejuosho said if Nigeria does not achieve this, there is no point in introducing any other law to Nigerians.  “We will make sure the provision is included in the 2018 budget.”

He reiterated his earlier comment that Nigeria should not rely on aid from other countries to fund its health care system.

Minister of Health, Mr. Adewole said “if the Basic Health Care Provision Fund is implemented, the National Assembly has done the country proud.”

In 2017, the Senate passed a resolution mandating the Appropriation Committee of the Senate to make provision for the Basic Health Care Provision Fund in the 2018 budget. This is seen a crucial step towards achieving the objective of the National Health Act, signed into law in 2014, which provides for not less than one per cent Consolidated Revenue Fund as basic health care provision fund.

The health minister said the coverage of the NHIS is significantly low because the scheme was pre-designed for the formal sector.

He said more than 75 per cent of the population of the country spend out of pocket for health services.

Mr. Tejuoso said the National Assembly is proposing to amend the NHIS Act, adding that old people will be included in the new arrangement of the NHIS.

Kolawole Owoka, the Chairman of the Health and Management Care Association of Nigeria, the umbrella body of Health Maintenance Organisations (HMOs) pushed the bulk of blame of poor coverage of Nigerians under the scheme on the regulators.

He said the structure of NHIS was not followed the way it was constructed since inception in 2005 because the regulators did not do a good job in monitoring the scheme.

“99 per cent of federal civil servants are covered under the scheme currently.

“What would have followed is that all states and local governments should have covered its own civil servants under the scheme. When you add the three together we should be talking of 20 to 30 percent coverage.

“Then we now focus on the informal and private sector which is hugely under covered.

“If we had followed it this way, it would have worked but we didn’t. The current structure is wrong. It is not the question of HMOs not delivering but the fact that the regulators that are supposed to regulate now wants to be the operators,” he added.

He further urged the national assembly to hasten steps in reviewing the act establishing the NHIS.

This means that the bill would lay down the framework for a universal health care system where everyone pays into the insurance scheme and everyone gets quality health care delivery, regardless of their employment status or personal wealth. The bill is also geared towards effectively regulating private health insurance providers in Nigeria to ensure that they deliver, not just for the well-to-do, but also the poor and people in rural areas.

On poor funding for health in the annual budget:

Mr. Tejuoso spoke on the ‘Abuja declaration’. He decried that Nigeria is yet to provide up to five per cent of its budget on health.

“I and the health minister should be held accountable if enough fund is not allotted to health in the 2018 budget appropriation,” Mr. Tejuoso said.

The health minister bemoaned the poor funding of the health sector and the health budget saying the federal and state government should increase spending on health.

Nigeria hosted the Heads of State of member countries of the African Union (AU) in 2001. There the “Abuja Declaration” was made with the leaders pledging to commit at least 15 per cent of their annual budgets to improving their health sector.

Since the declaration, Nigeria has not attained the pledged funding benchmark as the federal government has never voted more than six per cent of its annual budget to the health sector.

The 2018 health budget is, in percentage terms, the lowest so far.

On implementation of the National Health Act:

The health minister said the National Health Act was passed in 2016 with a policy on improved Primary Health Services.

He said if the National Assembly includes the Basic Health Care Provision Fund in the 2018 budget, the implementation of the act will substantially move towards completion.

Mr. Adewole had in an interview with PREMIUM TIMES said all parts of the act have been implemented except the Basic Health Care Provision Fund, a position the Nigerian Medical Association refuted.