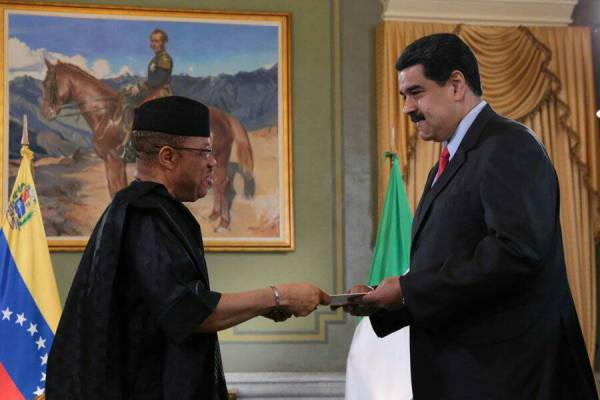 President Nicolas Maduro of the Republic of Venezuela, has called for stronger bilateral ties between that country and Nigeria.

Mr. Maduro said this when the new Nigerian Ambassador to Venezuela, Martin Cobham, presented his Letters of Credence to the President on Monday, in Caracas.

A statement from the Nigerian Embassy in Caracas made available to the News Agency of Nigeria in Abuja said that Mr. Maduro also called for sustained interaction with Africa.

He further urged for increased South-South co-operation in the various international fora.

Mr. Maduro called for the opening of new vistas in areas of mutual benefits for the development of the two countries.

Mr. Cobham in his response conveyed the fraternal greetings from President Muhammadu Buhari to Mr. Maduro.

The envoy pledged to collaborate with the relevant officials of the country to sustain the existing bilateral ties and further deepen partnership as spelt out in various MOUs and Agreements of the two countries.

He also solicited for support from his host to enable him succeed in his assignment.

NAN reports that Venezuela established diplomatic relations with Nigeria in 1965.

Both countries are members of OPEC.