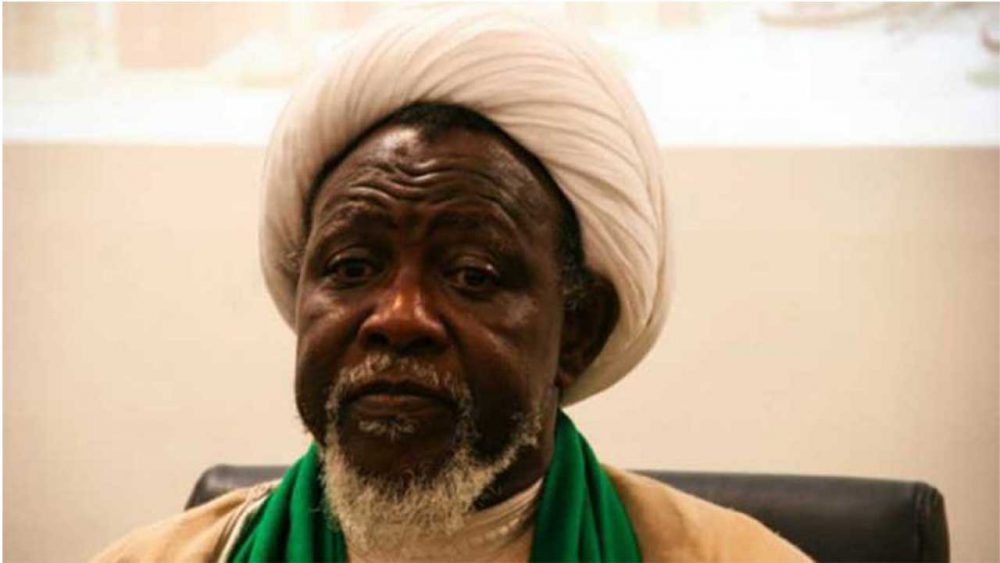 A justice advocacy group, Access to Justice, has petitioned the Office of the United Nations High Commissioner for Human Rights over the continued detention of Ibrahim El-Zakzaky, the leader of the Islamic Movement of Nigeria.

In a letter addressed to Diego García-Sayán, Special Rapporteur of the Human Council on the Independence of Judges and Lawyers, the group expressed serious concerns about the willful disregard of court orders relating to Mr. El-Zakzaky’s release by the executive arm of Government, and its impact on the state of the rule of law in the country.

“The persistent reluctance of the President Buhari-led government to respect the principle of separation of powers, which is a core component of constitutional democracy and the rule of law, indicates complete disregard for its international, regional and national obligations,” the group stated in the letter dated January 14, 2018, and signed by Adenike Aiyedun, its Deputy Director.

“The failure of the government to uphold the rule of law is undermining and endangering Nigeria’s fragile constitutional democracy, and causing widespread loss of faith in the authority of judicial institutions.

“Furthermore, it is escalating fragile ethno-religious tensions in the country, which if unchecked may lead to the outbreak of major conflicts. As a member of the United Nations, the Nigerian government is bound by the cherished principles of that body and by several binding treaties on good governance, human rights and the rule of law.”

Mr. El-Zakzaky and his wife, Zeenat, have been in detention since a deadly raid by the Nigerian army on his IMN group in Zaria.

The army killed and secretly buried at least 347 members of the sect.

In December 2016, a High Court held that the arrest and detention of Mr. El-Zakzaky and his wife was illegal and unconstitutional, and ordered their immediate release from detention.

But the Nigerian government ignored the court ruling, with a presidential spokesperson, Garba Shehu, saying the continued detention of Mr. El-Zakzaky was for his own safety.

“The Buhari Government is also flouting several court orders, including those of the ECOWAS Court of Justice by refusing to release Rtd. Colonel Dasuki Sambo, a Senior Government Official under the last administration, who is facing criminal charges,” Ms. Aiyedun said.

“Following the example of the Federal Government, a number of State Agencies are also flouting court orders, and acting with impunity. Under the Nigerian Constitution as well as Regional and International treaties binding on Nigeria, the Nigerian State must respect the rule of law, uphold and implement court orders, and respect the authority of each arm of Government.”

The petition to the UN came nearly a year after a United Kingdom-based Muslim advocacy organisation, the Islamic Human Rights Commission, dragged President Muhammadu Buhari and Mr. Buratai before the International Criminal Court for the killing of IMN members.

Last week, hundreds of members of the IMN protesting the continued incarceration of their leader was forcefully dispersed by armed police officers in Abuja.

Fifty two people were arrested, the police said in a statement.

The protest came amidst rumours of Mr. El-Zakzaky’s death in detention, forcing the Nigerian government to hastily organize a media appearance of the Shi’ite leader with some selected journalists.

Access to Justice requested the UN Special Rapporteur to undertake an urgent country visit to Nigeria to assess the situation and ensure that full and independent investigations are conducted.

“Based on this fact-finding mission, the Special Rapporteur should provide his conclusions and recommendations to the Nigerian Government,” Ms. Aiyedun said.

“We make a formal appeal to the Nigerian Government to respect the supremacy of the Constitution, and implement/enforce all court orders. The Special Rapporteur should emphasize Constitutional, Regional and International obligations of the Government to ensure the independence of the judicial branch of Government.

“We refer Nigeria’s deteriorating rule of law situation to the attention of the UN Commission on Human Rights urgently in order to avoid a further degeneration of the situation. The Commission should also engage the executive arm of Government to facilitate the release of El-Zakzaky and his wife before the situation becomes any more severe.”