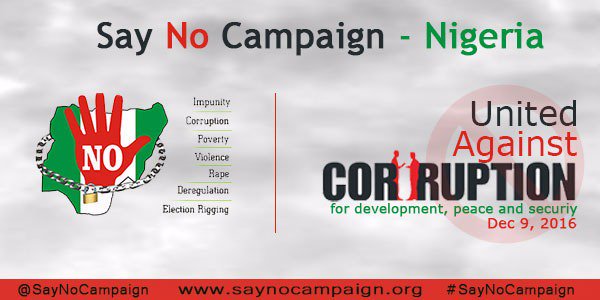 Say No Campaign, a coalition of some civil society organisations, says plans are underway by the organisation to establish database of corruption cases across the country to enhance investigation.

One of the conveners of the group, Jaye Gaskiya, stated this in Abuja on Wednesday when the group visited the National President of the Nigerian Labour Congress (NLC), Ayuba Wabba, in Abuja.

Mr. Gaskiya said that the establishment of the database became imperative due to many corrupt cases believed to being swept under the carpet in place of new ones.

According to him, the focus now is on how the anti-corruption battle can become the citizens’ fight so that there can be no sacred cow.

The convener said that the database would help to intensify the cases as well as encourage Nigerians to monitor the cases.

“We are working on having a comprehensive database of cases and allegations of corruption in Nigeria so that no case is swept under the carpet or forgotten because of new ones.

“This is because there is much impunity going on in the system that needs the knowledge and action of the masses to speak up and put an end to it.

“It is to this that we are organising a rally on December 8 with the theme `Anti-Corruption March’ to mobilise Nigerians against corruption,” he said.

Mr. Gaskiya said that the visit to the labour leader was to solicit partnership for the fight to curb corruption.

Responding, Mr. Wabba commended the group for its initiative, adding that curbing corruption was in the heart of the congress.

He said that NLC had a policy document that covered issues on good governance and advancing democracy in Nigeria.

The labour leader said that political office was supposed to be for the service of the people but that politicians had hijacked it for their selfish aim.

“If you look at the Nigerian situation today, people look at politics as an investment and some even borrow money to run for offices, and once they win, the first thing is to recover their money.

“This is why politics is a business in the context of Nigeria and that is what has made our system very problematic; so, we need to change that system and advocate against impunity.

“The problem with Nigeria has been leadership; if you look at history, most of the leaders emerged through unexplainable processes of only the decision of the few as against the majority.

“Until we, the masses, are on the same page to agitate against these problems, they will not stop because politicians only think of how to exploit the masses for their own benefit,’’ he said.

Mr. Wabba pledged to partner CSOs to participate in Friday’s rally to fight against corruption and to chart a way forward to continue to struggle for good governance.

32 countries to participate in Miss Africa beauty pageant in Calabar