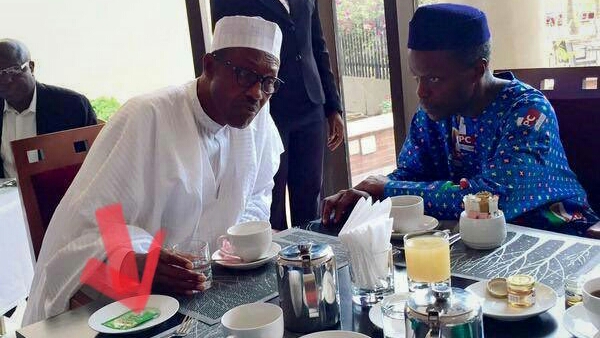 Atiku Abubakar delivered a subliminal swipe at the All Progressives Congress Saturday, barely a day after dumping the ruling party.

The former vice president joked about his former party’s 2015 campaign tactics after a user wrongly captioned a picture of him taken some years back.

The user, U.S.-based Nigerian literary critic Ikhide Ikheloa, had fawned over the photo he thought depicted Mr. Atiku as drinking garri, saying he would vote for the former vice-president in 2019.

Mr. Abubakar is expected to contest the 2019 election, although he is yet formally declare or join a new party since leaving the APC.

Some netizens quickly deduced not just the prank in the response but its casualty: the APC.

In the build-up to the 2015 elections, top APC chieftains, including Mr. Abubakr, projected themselves on social media as commoners.

Then-candidate Muhammadu Buhari and his running mate Yemi Osinbajo were seen at one time having sachet Milo as a beverage during a meal.

The picture was arguably the most famous populist appeal by the campaign at the time, as it portrayed the candidates as humble and frugal.

Critics have, however, slammed the president and his vice for retaining the multi-billion naira food budget at the State House since assuming office.

Mr. Abubakar blamed his departure on the APC government’s failure to bring about the change it promised Nigerians in the way public businesses are conducted.

The APC had “not only failed to manage expectations of a populace that expected overnight ‘change’ but has failed to deliver even mundane matters of governance,” he said paraphrasing Governor Nasir el-Rufai.

Mr. Abubakar, vice president from 1999-2007, did not immediately say which party he’ll move to next, but suggestions are rife that he has concluded plans to join the PDP, which has been openly courting him in recent months.