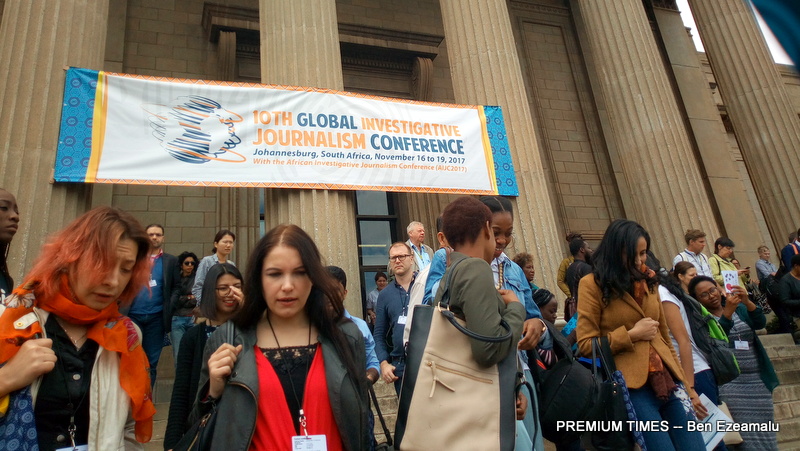 Erecting a wall between donor agencies and newsroom beneficiaries of their grants is one way of maintaining editorial independence, journalists at the ongoing Global Investigative Journalism Conference in Johannesburg, South Africa, have said.

The conference, a gathering of over 300 investigative journalists from across the world, began on Wednesday.

At a session on Nonprofits and New Models on Friday, Anya Schiffrin, said donor funding and newsroom independence has continued to be a source of great concern for media practitioners.

Ms. Schiffrin, said lots of journalists have stories about their donors calling them to make editorial suggestions such as requesting that they interview a particular individual.

“One solution is creating a wall between between funding and editorial arms such as having a firewall between newsroom and Board of Directors such that the board does not see editorial content before it is published,” said Ms. Schiffrin, Director of Technology, Media and Communications at Columbia University, New York.

“Donors can outsource decision making about grants, for instance, awarding funds to intermediary groups who in turn award it to news organizations.”

Maria Theresa Ronderos, Director of Open Society Foundation on Independent Journalism, said her organization focuses on supporting the development of media organizations to enable them to do the journalism they want.

“So what do we really ask of grantees? What we really want is for them to be entrepreneurial and to enhance their critical capacity to understand the digital area and their audience,” said Ms. Ronderos, a Columbian journalist.

She said her organization also wants to see quality journalism as well as a clear vision from grants beneficiaries, adding that the pool of grantees have shrunken over the years.

According to her, Open Society Foundation has received 699 proposals from around the world out of which 40 had been pre-selected and about 15 would receive their funds in the end.

Dapo Olorunyomi, the Publisher of PREMIUM TIMES newspaper, said to enhance collaboration between media organizations and donor agencies, they must have shared values.

“If you want to do independent journalism, you have to look at the values that drive you,” said Mr. Olorunyomi, one of the panelists at the session.

He said that if the relationship between funders and newsroom is overstretched, “a false problem which doesn’t exist” could be created.

Ms. Ronderos said media organizations having diversity of funding, whether donors or advertising, is essential to maintain their independence.

“It is also important to show a donor that you are receiving money from the public, it will be a plus because it sees you as connecting with your audience.”

Some of the panelists said their organizations had turned down funds from donors as a result of them having contrasting interests.

Drew Sullivan, Editor and Co-Founder of Organized Crime & Corruption Reporting Project, said his organization returned $5,000 to “an organized crime figure,” adding that it would be ideal to have a pool where journalists can access funds for their investigations.

Mr. Olorunyomi said his organization rejected two grants last year and one of the cases was because the interests of the donors did not align with that of PREMIUM TIMES.

“We need a new kind of pressure to support the independence of the media.”