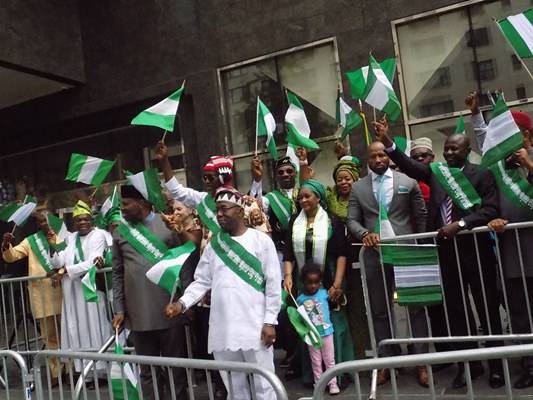 Ibrahim Magu, Governor Okezie Ikpeazu of Abia and Mayor Bill de Blasio of New York, among others, joined the revellers at the Independence Day Parade in New York on Saturday.

The Correspondent of the News Agency of Nigeria reports that Mr. Magu joined the Parade, which began at Second Avenue on E. 54th Street and ended at E. 44th Street at Nigeria House.

He later joined other dignitaries at the Independence Day Festival at Dag Hammarskjold Plaza near the United Nations Headquarters, in the afternoon, after the Parade.

Known as the largest celebration of Nigerians outside the homeland, the annual Nigerian Independence Day Parade, in its 26th year, celebrated the very best of Nigeria’s food, music and people

The mayor, in a signed proclamation presented at the Festival by Deputy Mayor Richard Buery, praised the contributions of Nigerians to the development and diversity of the city.

“New York would not be the diverse and dynamic city it is today without the influence of Nigerian immigrants.

“Our large and thriving population of Nigerian Americans has strengthened every facet of the five boroughs, with many serving as leaders in the fields of business, academia, medicine, government, technology, the arts, and more.

“As New Yorkers of Nigerian descent celebrate 57 years of Nigeria’s independence, I am pleased to recognise the indelible impact this vital community has made on our great city, and the many ways it continues to shape and fortify our future.”

According to him, the lively procession is a terrific way to showcase for all New Yorkers, the rich heritage and spirit of fellowship that defines Nigerian Americans.

“As Nigerian New Yorkers unite and celebrate, I commend the Organisation for the Advancement of Nigerians for its efforts to organise this terrific event, defend the rights and interests of Nigerian Americans, and enhance the cultural vitality of our global city.”

Mr. Ikpeazu, represented by his Deputy, Ude Chukwu, commended Nigerians in the U.S. for being united in spite of their differences.

He lauded them for projecting the image of Nigeria positively to the whole world, saying the homeland is proud of the contributions of Nigerians in the U.S.

The Deputy Mayor of Newark, New Jersey, Ugo Nwaokoro, praised Nigerians for standing united in spite of the obvious challenges in the homeland.

“There are many problems back at home but we must all come together to build the Nigeria of our dream,” Mr. Nwaokoro said.

The Acting Consul-General, Consulate General of Nigeria, New York, Nicholas Ella, commended the organisers of the event for their patriotism.

“At a time of renewed American interest in our diplomatic and bilateral engagements, we as a nation must come together to promote and showcase our unity, cultural diversity and strength of character.

“This year’s Parade has demonstrated our resilience as a people and the love for our fellow mankind,” Mr. Ella said.

The President, Organisation for the Advancement of Nigerians, OAN, Solomon Bakare, said the organisation was committed to taking initiatives to make Nigeria great again.

According to him, OAN focuses on bringing awareness to the contributions of Nigerians in the U.S. while also standing to the needs of American Nigerians.

“With its unbiased approach, it addresses the needs of all Nigerians no matter their ethnic or religious background,” Mr. Bakare said.

He thanked the Nigerian community in the U.S. for their continued contributions to the event, saying that the event is not government-sponsored but sustained by the hard-earned contributions of Nigerians.

Yinka Dansalami, Chairman of the Nigerian Independence Day Parade Committee, commended all the participants from all over the world including from Nigeria.

Mr. Dansalami particularly commended the New York Police Department for their continued support to making the annual event successful for the past 26 years.

NAN reports that Nigeria’s Ambassador/Deputy Permanent Representative to the UN, Samson Itegboje, including many officials of the Nigerian Permanent Mission and the Consulate-General, also graced the occasion.

Among the several Nigerian groups that actively participated were the Igbo Organisation, USA, Faith-based organisations, Nigerian Nurses Association of USA, Organisation for the Advancement of Nigerians, and entertainment organisations.

Thousands of Nigerian youth also had the best of time, singing and dancing to Nigerian music.

The event, which is Africa’s largest Parade in the U.S., also showcased Nigeria’s unique culture and promoted the positive image of Nigeria to the rest of the world as several other nationals joined in dancing to the Nigerian music.

Monkeypox: Bushmeat consumers in Bayelsa insist on its consumptions

Monkeypox: Bushmeat consumers in Bayelsa insist on its consumptions