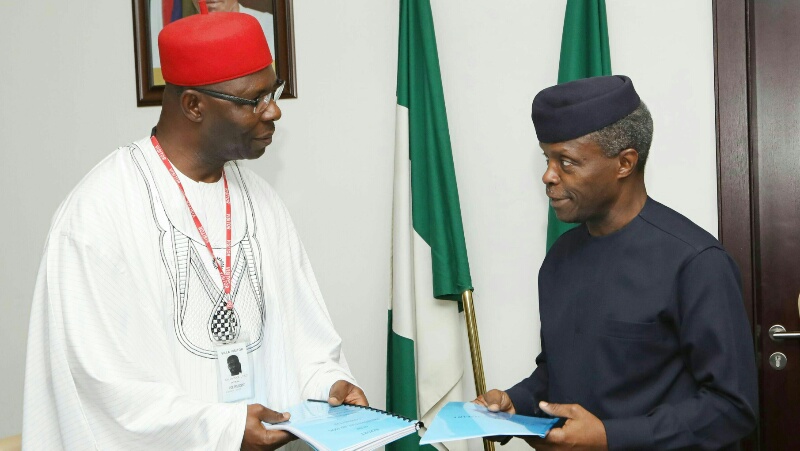 Chairman, Senate Committee on Anti-Corruption and Financial Crimes, Sen Chukwuka Utazi (l) presenting the Report of the Committee to ; Vice-president Yemi Osinbajo at the Presidential Villa in Abuja on Wednesday (20/9/17). 05048/20/9/2017/ ICE/NAN

The Presidential ad hoc committee set up by the Nigerian government to facilitate the return of the country to Egmont Group submitted its report to Vice President Yemi Osinbajo on Wednesday.

The Chairman of the committee and Senator representing Enugu North, Chukkwuka Utazi, gave the information to State House Correspondents after the committee met with the Vice President.

According to him, the committee was optimistic that with appropriate suggestions and actions to be taken by the federal government, the country will soon return to the global financial intelligence group

“The Committee is a Presidential ad hoc Committee to reposition the Nigeria Financial Intelligence Unit and then restore Nigerian membership of Egmont Group from which was suspended on July 7.

“This committee is here today to present a report to the Vice President which he will in turn discuss with Mr President before any formal decision will be taken by the government,’’ he said.

Mr. Utazi declined to mention what the report contained or its recommendations noting that the Vice President just received it and would discuss it with the President before the committee could comment on it further.

“This committee has worked to ensure that everything that led to our being suspended from the Egmont Group was handled in that report.

“By the time this report would be considered by Mr President and the Presidency, Nigeria would get out of the woods,’’ the Senator said.

He said the committee was not set up to justify the suspension or otherwise but noted that “the thing is that we have been suspended and we are working very hard to come out of such a situation.’’

The Senator said that going forward, the committee expected that with the timely intervention of the Presidency in sync with the passage of the law by the Senate in July, it showed that Nigeria was moving forward.

He also noted that the international community was following the processes in the country to ensure that the suspension was lifted.

National FIUs collect information on suspicious or unusual financial activity from the financial industry and other entities or professions required to report transactions suspected of being money laundering or terrorism financing.

FIUs are normally not law enforcement agencies, with their mission being to process and analyze the information received. If sufficient evidence of unlawful activity is found, the matter is passed to the public prosecution agencies.

Court to rule on Ndume’s suit against Senate in October