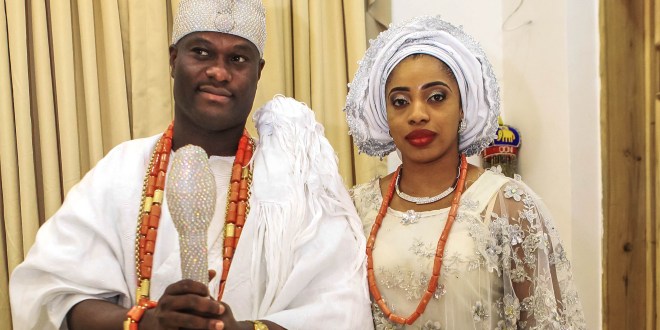 Ooni of Ife reacts to split with wife

The Ooni of Ife, Adeyeye Ogunwusi, has reacted to the declaration of his now ex-wife, Olori Wuraola, that she was out of the marriage for good.

Speaking through his aide, the monarch said he would speak on the matter ‘at the appropriate time.’

The Ooni’s Director of Media, Moses Olafare, disclosed that the palace is aware of “all that have been written” and that there would be a response from the monarch soon.

Speaking to Nigerian Tribune he said: “the House of Oduduwa would maintain silence for now.’

“In this era of social media, where people have free access to Internet, as constitutionally permitted by laws of the land, people can say anything. In spite of all being said on the issue, decorum still requires that we in the House of Oduduwa maintain silence, at least for now. This is because marriage is strictly a private matter that should not subjected to undue public uproar. When it is necessary for us to talk, we will surely talk on the issue.”

Meanwhile, despite the reactions that the news has generated and public empathy, Olori Wuraola has indeed moved on. According to her, all that matters to her for now is providing aid for women and children across the world.

She said, “My journey continues as a Humanitarian aiding women and victims of domestic violence and abuse with the United Nations.”

The two got married on March 16, 2016 with the monarch saying then when he took Wuraola for a wife that she was the choice of the gods.

After denials from the palace and from an aide of the king on August 15, that the marriage was intact and the couple still happily married, Olori Wuraola took to her Instagram handle on Wednesday that there is indeed a collapse.

Urging women to take a walk out of troubled marriages, the glamourous Olori also said in her statement:

“What I can confirm is that the Ooni and I are no more. I inhale love and exhale gratitude. My journey continues as a Humanitarian aiding women and victims of domestic violence & abuse with the United Nations. No matter how much time you’ve invested, no matter the use of media to silence & manipulate, no matter the circumstance, slander, embarrassment, threats and lies: Get out and seek immediate help!”

The Ooni got married to his now estranged Edo bride at an elaborate traditional marriage which held in Benin, the Edo State capital.

The wedding rites were performed in the traditional Benin culture at the residence of the bride on Ewere Street, Etete, in Oredo Local Government Area of the state.

Although the monarch was not physically present, his father, Oluropo Ogunwusi, represented him.