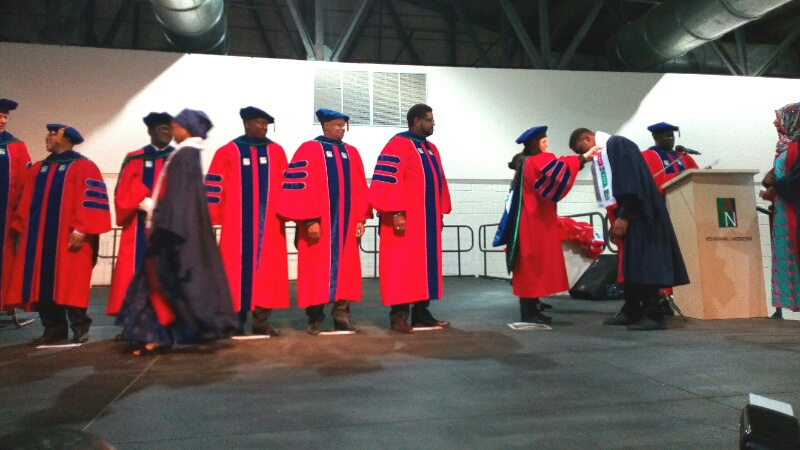 The American University of Nigeria, Yola, on Monday inducted more than 200 students for its 2017/2018 academic year.

Speaking at the ceremony, Dawn Dekle, the AUN President, urged the students to make use of the opportunities offered by the institution to achieve great things.

“Today’s Fall Convocation and Pledge Ceremony is the first in two ways: Our first gathering together as a community as we begin a new academic session, and my very first event with all of you as a community, after my assumption seven weeks ago to lead this great university as the president,” said Ms. Dekle, who was appointed in July.

“As we begin this 13th academic session, I encourage everyone of you to be tolerant and have respect for one another. Remember that in the past you have always taken the AUN Community Pledge of Integrity. Today, our newest class will join in taking the pledge, I implore you to live it and demand it from your colleagues.”

Scores of parents, including Nollywood stars, Olu Jacobs and his wife, Joke Silva, who attended the ceremony watched as the new students were presented with their class slashes followed by the rendition of the American and Nigerian national anthems.

Idris Mamman, the President of the Student Government Association, encouraged the new students to “learn anything and everything” that piques their interest.

“You have to take every opportunity to learn, learning after all is what has brought us to this place,” said Mr. Mamman, who is studying Business and Entrepreneurship.

“First, learn from your faculties, we have amazing faculties here to inspire and teach you. Learn from members of staff, your resident assistants, be confident that they are giving you good advice. Learn from your upper classmen, juniors and sophomores, engage with them because they have been here longer than you and hence have the experience that will help you settle in.

“Learn from your peers, I strongly encourage you to be kind to everyone, never burn the bridge between yourself and others because you never know when you will need them in future.”

Earlier, Byron Bullock, the Vice President, Student Affairs, urged the new students to update their contact lists by removing those who hold them back and replacing them with people who are on the same path with their priorities.

A parent, Alaye Eremie, said he braved the odds to bring his son to the school despite reports of insurgency in the state.

“Somebody said I have the heart of 10 people bringing my son here, they make it look like it’s a war zone but it’s not. I don’t know whether when we leave they’ll start the war,” said Mr. Eremie, whose 6-foot 6-inch son, Gabriel, emerged the tallest new student.

“The media have not helped very well in propagating news and information across because it’s totally different from what I’m seeing.

“Before we came, like two-three months before this time, we went on the net, read everything about American University and found out the one in Nigeria is a franchise.

“We did quite a lot of questioning, even went looking for students who just finished, the ones that finished five years ago, we got all and we found out that their testimonies are the same, no difference.

“So, we had this confidence that we can give it a trial.”