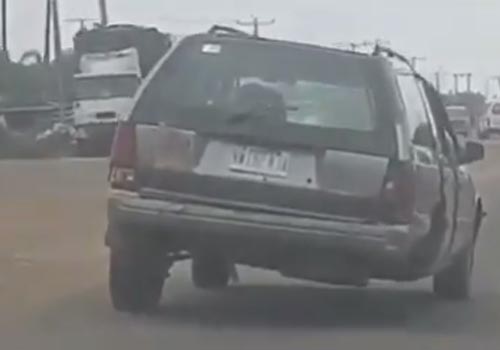 Unbelievable! A car with only three tyres is seen in a video driving on a Nigerian road.

The video which captured the wagon, with license plate number NW 192 KJA, jerking along dangerously on a highway was posted on Twitter by Henry Okelue (@4eyedmonk), Friday.

It was only the car driver that was inside.

Other vehicles could be seen speeding past in the video.

The car looked quite dilapidated to the extent that it was difficult to figure out what brand it was.

It is unclear where and when the video was taken.

He said the car was “mechanically deficient” and ought to be impounded if seen by men of the FRSC.

“It’s unlawful to have a car with only three tyres driven on the road,” Mr. Kazeem said. “It’s tricycle only that has three tyres .”

Man arrested for allegedly beating neighbour to death with charm