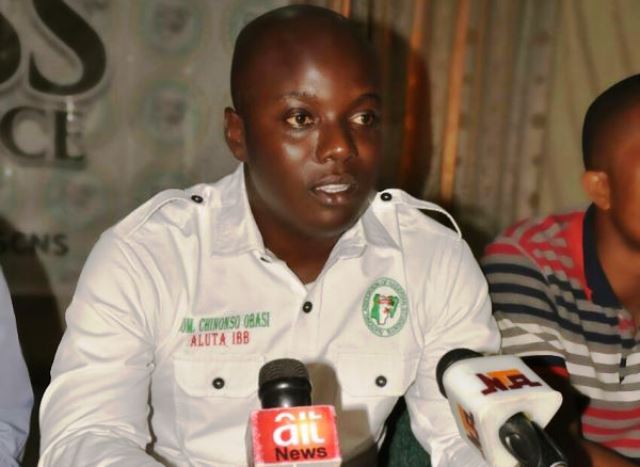 The National Association of Nigerian Students, NANS, has criticised the recently launched National Economic Recovery and Growth Plan, ERGP, saying it does not have provision for addressing challenges faced by universities and students.

Speaking with journalists on the indefinite strike declared by the Academic Staff Union of Universities, ASUU, the President of NANS, Chinonso Obasi, also lamented that the strike comes with untold challenges and hardship.

According to him, incessant strikes translate to distortion of learning, unnecessary delays and waste of time in the completion of courses of study.

Mr. Obasi called on the federal government to consider the risk of millions of idle young people on the streets by addressing the lingering issues that have led to the strike.

He said that social inclusion and active participation of young people on issues that concern them is a global trend and that the students and youth cannot continue to sit back and fold their arms while things go wrong.

“The need for the Nigerian students and youth to know about the contents of the National Economic Recovery and Growth Plan and how it directly impacts on their lives now and in the future and understand how they can actively participate in the implementation of the plan cannot be overemphasised.”

The NANS President said the students condemned the non-inclusion of critical issues relating to addressing the challenges of the Nigerian students and youth in the ERGP as well as provisions to address and bring to an end the lingering issues and protracted disagreements between ASUU and the federal government.

“As critical stakeholders in the Nigerian Project, the leadership of NANS is mobilising Nigerian students nationwide to demand explanations from the federal government as to why over N1 billion would be expended on document that is devoid of critical inclusions and provisions to address the challenges of the Nigerian students and youth as well as practical strategies to put an end to the germane and perennial issues that translate to the incessant distortion of smooth learning the nations ivory towers.”

ASUU recently embarked on a nationwide strike to press home multiple demands including poor funding of universities and part payment of lecturers’ salaries.