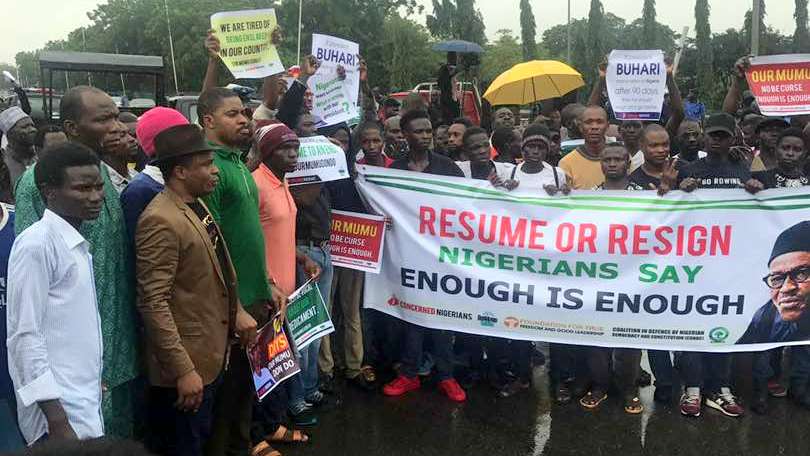 Senator Ben Murray-Bruce on Tuesday condemned a police assault on a journalist working with one of his media outlets.

Uyi Amadin, a reporter with Silverbird Television, was brutalised by officers who cracked down on a group of anti-Buhari protesters on Tuesday afternoon

The police said they moved to disperse about a dozen citizens who camped at Unity Fountain in downtown Abuja, protesting President Muhammadu Buhari’s indefinite stay abroad on medical grounds.

The president has not stepped inside the country since May 7, 93 days ago.

The protesters had on Monday commenced the sit-out efforts, which they used to demand that the president either return to the country or resign immediately.

The protesters returned to the venue Tuesday morning.

Mr. Amadin, who covered the events, told PREMIUM TIMES he was brutally attacked by the police, alongside his cameraman.

Their camera was then snatched and its content was tampered with, he said.

The police accused the protesters of constituting public nuisance by disrupting vehicular traffic and harbouring individuals with criminal intents.

But Mr. Murray-Bruce, reacting to the development on Twitter, said his reporters, whom he described as “family”, were only executing their lawful duties.

“I condemn the police brutality on @SilverbirdTV’s Amadin Uyi. I don’t have staff. I have family and an attack on them is an attack on me.

“Uyi was doing his duties as provided by the law. Why should my family member be thus treated! This is an an attack on press freedom,” he added.

The senator admonished police Inspector-General, Ibrahim Idris, to launch a thorough probe of the violent attack against the reporter.